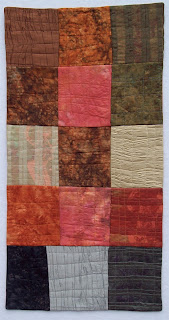 Another small quilt made quite quickly (in a day due to deadline) from ideas that had been gestating over quite a few months of thinking about the theme/requirements and the materials I had at hand. Made in response to an exhibition entitle “The Silk Road”, to be held at the Arts Society of Queenstown New Zealand, the basic requirement was that the quilt be at least $40% silk. Though I have used silk before, specifically raw Thai silk in my quilt for Litha (Summer Solstice), I usually work with cottons - but, like all quilters anticipating a challenge, I did have some silks in my stash! I wanted to keep the quilt small, and continue the idea given birth to in the previous quilt… to honour mothers and the acts of mothering. This has been a life theme of mine, since becoming mother almost 23 years ago – the experience gave me insights beyond understanding of what it means to ‘be’ and ‘become’ a mother.
The fabrics that inspired the quilt came from a ‘book’ of furnishing fabrics, salvaged and given to me by a colleague who knew of my quilting passion (thanks Cleona). Many of the samples for the curtains were from 100% silk – stitched and crimped - such luxury, but of course sizes were limited, being samples. The colours of the samples were so earthy, watery, elemental, reminding me of the earlier quilt and the influence of earth’s colours, in caves, of prehistoric images carved into and made from earth. Then I found other hand-dyed silks bought a long time ago - also in quite lovely earthy colours. These provided the 'background' to insert an image of Earth as Mother - ourselves as Mother of earth.
The image onto fabric from a screen print by Sue Swanson, produced when our children were quite young, was that of the Bird-headed Snake Goddess of early Egypt, symbol of re-turn to life re-newing itself (commonly referred to as 'fertility' from a male sexist point of view). Like all goddesses in prehistory, into the era of patriarchy, She too is hidden – as if behind a curtain, or veil, as many women still quite literally live out their lives and perform their life-sustaining and enhancing ‘duties’. 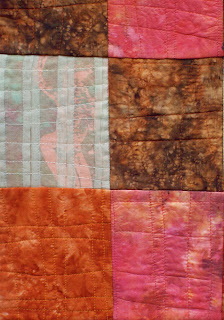 For me this ancient image (deliberately hidden behind a 'curtain') inspires internal strength, courage in face of all odds, recognised in my own life experiences in be-coming woman, as a single parent for 22 years, and witnessed in the lives of other women - though the qualities exercised are most often overlooked, hidden and veiled.
Posted by Annabelle Solomon at 4:39 AM No comments:

‘Learning from the Mothers’: a quilt for IWD’s 100 years' anniversary

A few weeks ago, my friend Sheila, who is currently on retreat in Victoria, sent me a quilt she had made for the International Women’s Day exhibition to be held at Braemar Gallery with the theme: ‘Celebrating the past; educating the future’. I had not thought to make anything, but when I saw her celebratory ‘frieze’ of ‘wonderful women’ using African motifs full of movement, life and joy my creative juices started to feel the need to put fabric together and give expression to the creative energies of women, particularly as mothers.
I had been reading about Palaeolithic (Old Stone Age) cave paintings, and the latest finds at Chauvet in southern France. It is a period defined as extending from 37,000 to 11,000 years ago. Such caves provide the most extraordinary examples of visual language – a language of signs and symbols coming out of a ‘void’ according to art historians. From my perspective, though all form originates in the void of unknowing, the images that cover the cave walls came out of the experience of these early humans: experiences that formed beliefs, ideas that we now know as ‘metaphors’, which carry the experience beyond, out of ‘pre-history’ into ‘history’, and the continuity maintained through the motherline.
The focal image in this small quilt (85 x 30cms) is that of the Great Mother, found at Willendorf, Germany in the late 19th century. She is most commonly known as a ‘Venus of Willendorf’ (- ideas mostly connected with ‘fertility’ rather than ‘sexuality’), and is dated at 30,000 years ‘old’. I clearly remember that when I first saw this image I was shocked that an overweight woman without revealing her face could represent the power of women; and be an image of beauty, one that was clearly admired and replicated, since the image has been found in archaeological digs spread across a wide range of Europe. But I soon came to love her deeply because of what she represents to me personally, which in some ways is too difficult to explain.
The simplest explanation is that I recognised myself in her, physically and spiritually. I know that I had ‘boasted’ of getting the stomach rolls (and they continue to roll in); but the strongest feeling was around her power to give birth, motherhood as a power that is accepting, loving, empowering of self and others; that having given birth and raised child/children did not diminish her meaning, her self perception or that of others, but that she felt humbled by experiencing the Mystery through her own physical body.
In calling this small quilt (880x300mms) ‘Learning from the mothers’ I thought of my dear son, Leo, of what he has learnt, as shown through many of his actions. It was significant that on the day this quilt went into the IWD 100th anniversary exhibition at Braemar Gallery, I assisted Leo in transferring his life’s ‘goods and chattels’ to his new home in downtown Sydney – a move to further independence, and from a practical point of view, of being closer to his study (Hons year in Socio-legal) and workplace. His actions have been the greatest affirmation that we learn from the mothers: in his case, from his belief in working for equity and social justice to remembering his friends by ‘rewarding’ them with a T-shirt of the candidate he had worked for in our local electorate, which seems quite trivial in some way – but on another level, it’s not at all trivial, but an action that affirms a worldview.
Back to the quilt. The image of the Great Mother come from my stash of screen prints made by Sue Swanson, soooo... many years ago, when we were ‘new’ mothers together; other fabrics were saved from a period when I experimented with painting over commercial cottons; choice of fabrics was made to represent the greatest, most necessary of Mothers, Earth. Some pieces are of panne velvet, and have a lovely ‘soft’ feel to them.  It came together in quite a short space of time… and there it is!
Posted by Annabelle Solomon at 3:25 AM No comments: