Trip outback - to 'the womb of the Mother' 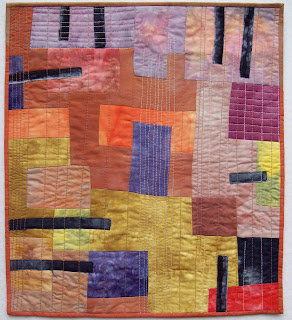 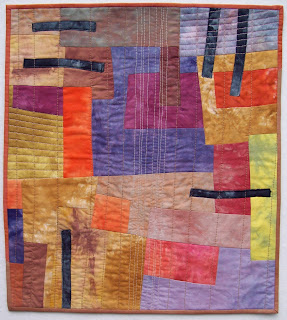 Our trip out to Broken Hill and Menindi was over 10 years ago. Leo would remember which year he was in at school – year 8/9? My notes say September 2000. It was a fabulous trip, where we stayed in GlenYs' friend, Taffy’s on-site caravan just on the Menindi Lakes, a spectacular place, full of peace an quiet, 100K out of Broken Hill.
The original quilt was one piece and is now a diptych and has been re-quilted. It expresses the wonderful variety of flora and fauna, the colours of the land on our journey out to the West. These colours included the human intervention of crops and weeds (such as the introduction of a purple weed supposed to feed cattle, known as Patterson’s curse, or is it known as Salvation Jane, for its capacity to survive the harshest drought). There is the yellow of Canola crops – also the yellow in the many forms of acacia. The Sturt desert-pea is also present, and reminds me of a very near accident we had with another car just outside the town that shares the border with South Australia. It was driven by aboriginals, who obviously had the ‘outback’ another understanding of when the car ahead indicates a right turn, it means OK to pass – but I actually was intending to turn right into a siding to look at the brilliant red flowers of the Sturt Desert pea up close.
We had travelled around 1400 Ks from the Blue Mountains, and the distance from Broken Hill to Adelaide in SA was around 650 Ks! The sense of space and distance was quite palpable – both on the ground and from an overhead viewpoint – and the land being artificially divided up for farming. The design of the quilt has an aerial aspect, showing the colours, arriving from memories of spatial distance. I also wanted to try a new technique, of ‘embedding’ different pieces into another, rather than simply ‘piecing’, which means joining one piece of fabric into another by doing a type of “L” turn by making a 45 degree nick through both layers to do the turn. After the right-angle turn is made, a seamline is sewn and the bottom fabric is cut away to create a ¼” seam for the top edge where the fabrics are joined, (thus removing the excess fabric from the bottom piece). Another turn could be made to complete the inset of the top fabric on 3 sides. Quite difficult to keep corners really precise and neat, but not impossible with practice! I think the quilt started out with some of my ‘practice pieces’, which grew and took on shape.
On the drive out west the road pushed ahead like a ribbon; at each slight rise the expectation of something different on the other side was usually thwarted – by more road looming straight ahead for miles. But there were noticeable changes in vegetation types every so often, with trees becoming more stunted.
The machine quilting emphasises this seemingly endless straightness, as though heading towards infinity. Wherever we went, the horizon seemed to move ahead of us – and was also behind, and around. The overwhelming sense of ‘presence’ obliterated the past and future, being literally ‘in’ the horizon, suspended in a sort of timelessness. At times we seemed to be taking a ‘road to nowhere’, with the only indicators were precarious manmade signs in which we trusted as we soaked in the circular horizon.
On reaching the Lakes, there was quite a lot of water in them, and dead trees were standing out of the water like silent sentinels to times of perhaps both drought and flood. The sun setting in the west over the lake’s horizon was a fierce golden ball, lighting up the clouds and showing a gentler mood as she slipped below the water. It’s all there in the quilt – now a diptych – called ‘Road to Menindi’.
Posted by Annabelle Solomon at 10:59 PM No comments: