Knowing Innana: the Goddess of descent and return

Shape-shifting is probably the most common feature of all goddesses across all cultures. All gods needed to bi-locate, at least – but what they often do is to multi-locate to meet the needs of those seeking their assistance. Shape-shifting is more of a forming spiritual connection to address the needs of followers across geographical boundaries, and even across the boundaries of cultural practices. Although the screen print in this little votive offering was originally of the Bird-headed Goddess of the Nile River,[1] she has shape-shifted for me into Inanna.

Over the years, Inanna has shown herself historically to be a wonderful example of that quality, particularly through knowing her influence in the lives of my friends going through much shape-sifting themselves. She has become present to me more recently in my own life, as I work my way through dealing with all the outcomes of having been diagnosed with metastatic (sometimes called ‘advanced’) melanoma, starting with the wide local excision on my cheek in November 2015 and going through to February 2016, when I started the immunotherapy treatment.

Sumerian Inanna is variously called Ishtar in Babylon, and perhaps Astarte or Ashera in Canaan and Israel. She is certainly of goddess of fertility, both for the land and as the virgin bride of the new king, who can renew her virginity to bring fruitfulness. She is similar to Persephone, daughter of the Greek Demeter, who descends to the Underworld annually in order to return fertility to the lands and those who dwell on it. There are many versions of the story, including the one that has her descending to rescue her consort/husband Dumuzi. Another tells of her descent on hearing the wailings in childbirth of her sister and Underworld counterpart, Ereshkigal. She was required to abandon an item of clothing in order to pass through the seven gates that guarded entrance to the Underworld. Finally, on arrival, it appears she gave her own life, being suspended lifeless on a hook until her ‘return’. (I’ve always said it is women who are the “sacrifice”). Whatever view or emphasis is given to the narrative, it is a story of a difficult and perhaps unwilling descent, but also of a triumphant return, bringing new life – and of holding the opposites.

Here she is standing triumphant with a full moon behind her. 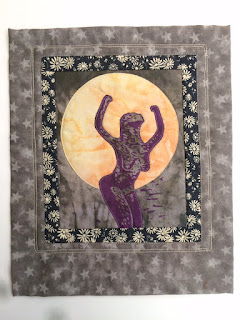 After two years and nine months of treatment with immunotherapy, it became clear that I was not being ‘rescued’ with the hope for outcome: NED (no evidence of disease). There had been other incidents during those years, which now I think of it, could be aligned to passing through the gates: loss of thyroid function, skin rashes, another seemingly unrelated melanoma on my vulva, lichen sclerosis, to be topped off with almost 3 months of dealing with a bout of very painful shingles that prevented me from having my regular infusions. During the last six months I’d been wondering why it did not seem possible to give me a PET scan to see if the lesions were still active. If they were not active, I could go off the immunotherapy with peace of mind, but for whatever reason, I could not have a PET unless I did cease treatment. Catch 22. Russian roulette.

Going through all of those ‘gates’ had caused various types of anxiety – developing stage by stage I suspect – until it just couldn’t be ignored! Perhaps most of all, I felt very disappointed in myself that I had not defeated the demon. I had worked so hard, but seemed to be left hanging! Thanks to the oncology team, they recognised the symptoms of my ‘existential anxiety’. The immunotherapy was halted (with my agreement), and a PET ordered. While the lesions had shrunk in size by more than 30% during the long course of treatment, they were still obvious on the CT scan, though the PET showed no metabolic activity. So no NED for me, but  a respite and at least I am now free of the grind of three-weekly infusions requiring blood tests prior and all the follow up. Now it’s a CT every three months.

I decided to show my Inanna rising from a lotus, a sacred flower across cultures. Its anchor is below the surface, and it shows its beautiful flower on the surface, nurtured as it is by its roots in the mud below. After all, Inanna is about change and transformation, no matter what her original and morphing stories. I can claim my own story, and I feel that I have shape-shifted to a new place in my ongoing story of living with melanoma. 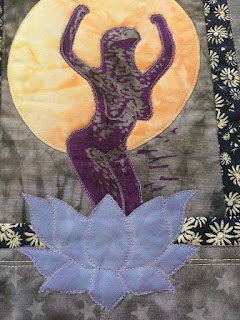 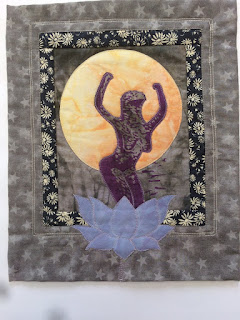 [1] Again I am grateful to the creator of this image, Suzanne Swanson. Together we made many screen prints of this powerful goddess, and I have nearly used them all now.
Posted by Annabelle Solomon at 8:44 PM No comments: