It might be embarrassing if I counted the number of started but not finished quilts in my possession (UFOs in quilt language), so I have resisted the temptation to count those lovely things inspired many moons ago and tucked away in separate boxes for safe keeping. The Maningrida quilt is one of them, which took its inspiration from two sources. The main source was of course the beautiful cotton screen prints by the Indigenous women at the Babbarra Women’s Centre in Maningrida in the Northern Territory, found in Spotlight who advertised that 30% of all sales would go back to the group in Maningrida. Printed on the selvedge of these beautiful fabric designs were the names of the artist sand the name of the item that is part of the everyday lives of these aboriginal women, items such as spider webs, fish trap designs and various edible plants and roots, all in a variety of colour ways. Here is a sample of some designs. 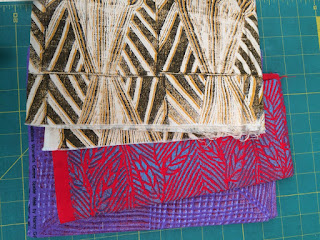 The design concept came from a book by Weeks Ringle and Bill Kerr entitled “Quilts made modern”.[1] It struck me as being a very simple and elegant design for these fabrics, which would go well with a quilt cover set I had for the second bedroom. It was going to be double-bed size in its original manifestation, but having been put to one side for a considerable number of years for multiple reasons. This grand design has how more than halved, and is more like a cot size. I figure it is better to get it finished in smaller dimensions than to struggle on with piecing the minute scraps to make the design. So the full size of 87”x104” has now come down to close to 32”x44”, named as a ‘wall or baby’ quilt (it's actually more like 36x36"). Just cutting my cloth according my means - by which  mean, my energy reserves.

Strips of random colours involved joining a various widths, from 1” to 2/14”, then cutting up into 2” lengths and joining to make the long strips desired. Very labour intensive, and quite fiddly in that all the seams needed to be pressed against themselves because of the cream seeded cotton! I had almost half a quilt, when I decided to take a shortcut and cut them all in half to make a wall/baby quilt. No more agonising! 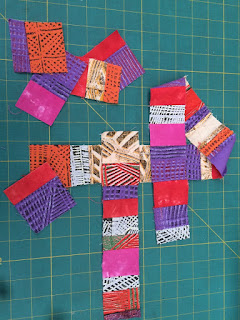 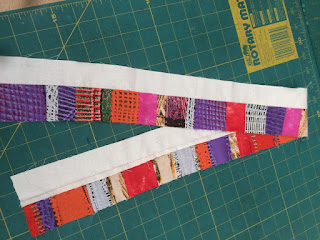 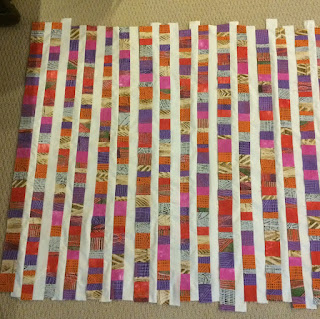 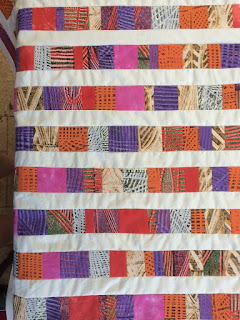 I’m not getting any younger, and as most know, have been dealing with immunotherapy treatment for metastatic melanoma over the past 3 years, eventually rendering the disease ‘inactive’ at the moment I am delighted to report.  But I’m not wasting any time, so I am heading for a finished article! It will look nice above the said bed covers on the wall until it decides to transition into a cot quilt! Below is the quilt top, as yet unjoined to its batting and backing fabric. I might need some help here! 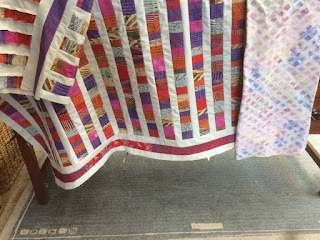 The help I need is because I do not have a space to pin the three layers together, and I do rather like the quilting design as it is shown on the front cover of the book, as seen below. This can only be done by someone with a long-arm quilting machine, so my next job is to look around for such a person. Look forward to posting the 'final product'! Original design below. 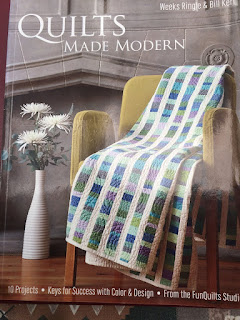 [1] 2010, C&T Publishing: CA. I bought it the year following publication, in 2011, so you can see how long this little quilt has been waiting for its resurrection.
Posted by Annabelle Solomon at 9:00 PM No comments: