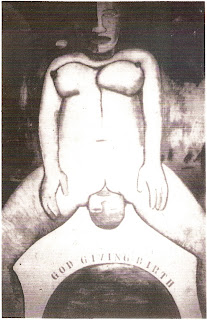 Jan's magpie quilt: PART 2
I looked at the themes emerging from the memoirs of her journey that Jan has published with the title of “Coming home to myself”. While her memoirs indicated the processes she experienced over the years, the underlying theme was that of connection and involvement: from her youth to the many years spent in a Christian Church community; about commitment to her partner and children; taking action for peace at Pine Gap in the Whitlam years; flourishing as a feminist through activities with other women to establishing a local women’s health centre; and especially her return to the land, source of inspiration. There have been so many powerful expressions of her commitments to and in life… all leading to a deep realisation of herself as woman, as Her-Self as Goddess Woman – in spite of, and maybe ultimately because she embraced an ‘addiction to relationship’, named as co-dependency.  Reading Jan’s memoir, I saw her as a person who cares deeply about her personal world, as committed to the well-being of those with whom she is in personal relationship, with the wider community and humanity, and in particular, her deep commitment to women and the land.

Jan’s monologue is interwoven with poems, written at different stages of her journey, which have undoubtedly helped in bringing together the story as it was gradually revealed to her by the magpies. In forming the design for the quilt I constantly toyed with the idea of including some text from the poems, and some celebratory quotes from her monologue did eventually appear near the bottom of the quilt, sitting in close contact with the magpie that was gazing back at the various elements she had revealed, (reminiscent of Mexican and Latin American folkloric traditions of including text in nooks and shrines, as used by Frida Kahlo’s in her work, for example.) However, the poem titled “A mini journey” written in 1988 (my aim was to insert it here, but I have yet to find out how to transfer a scan from the book), a poem of deep gratitude that revels in her close association to her magpie friends, kept refusing pride of place on the front of the quilt, preferring to be attached the back, as though representing the foundation stone of a sacred site.

The back of the quilt was starting to build up in my imagination a ‘reverse quilt’, one made from patches printed of text – but I had to stop somewhere! However, another image called out to be included on the back of the quilt, one that I deem to be as equally as important as the symbols and images on the front. In fact, this single image seems to hold Jan’s story represented by the images of the different phases of her life story symbolised on the front. It is that of Monica Sjoo’s painting from 1978, entitled “God giving birth”, a painting that almost found her in a British court for blasphemy, so deeply entrenched is our image of divinity. (http://www.monicasjoo.com/exhibition/1_god_giving_birth.html)  The fabric chosen on which to situate these printouts seemed somewhat out of place with the sort of freedom suggested by the hand-dyes of the front. It is a printed navy blue cotton, full of small white daisies bursting forth. It came to represent the ‘flourishing natality’ that I felt in Jan’s courage to tell her story. (These terms are used by Grace Jantzen (1998: Becoming Divine: towards a Feminist philosophy of Religion).

This is how I have read Jan’s story, and tried to express it through the quilt she had asked me to make, naming it after her monologue, “Coming home to myself”. Though they are not included on the quilt, I’d like to include some excerpts from Jan’s text that resonate very strongly with its imagery. She wrote of her experience of the cycles of the seasons as one of connection, which ‘…has reconnected me to my inner processes… to live with the paradox of both beauty and terror in the power of the elements… I feel connected as I open myself to the darkness and the light… I need enter the place of the womb of transformation, of birth into light as part of the eternal cycle of life and death.  Of her spirituality, Jan wrote, ‘I am one with feminine divinity, the Goddess… she is expressed through me.’ And again, ‘…my sense of returning to the land is in fact my return to the Great Mother. I have discovered her within me, and surrounding me in the creation. I am flesh of her flesh and breath of her breath. She called my name and I followed.’ These sentiments are echoed when she writes: ‘the voice of the feminine is rising and I add my voice. Nowhere is that voice more powerful for me than in the land, the earth. The voice I was hearing and trying to communicate with was the voice of the archetypal Great Mother, from our collective unconscious. Our stories tell her story… She has been calling us from the beginning of time... She is calling us back to connection, back to our feelings, back to the womb, where we can be birthed again by the divine energy of earth.’

The creation of Jan’s magpie totem quilt has been a privilege and honour, and occurred on and off over perhaps a 12-month period, or longer. It has taken me through the cycle of creation as identified in the seasonal cycles of change many, many times over. As such, it has been quite a fascinating journey of the creative process, in which I have felt a coming home to myself, re-creating and deepened my connection to my own understandings and expressions of a personal spirituality as Goddess, as Woman, as a Creator. And, I now feel a personal and spiritual connection to magpies in a way I’ve never realised before and will never lose as my understanding of the interconnectedness of all life and non-life continues to grow and be blessed. Borrowing the words used by Jan to tell of reunion with her ‘beloved companions’, the magpie’s song now speaks to my spirit in ways that words can not.

Posted by Annabelle Solomon at 2:57 AM No comments: