Life of a star


Of course our most important 'star', that nearest to us is the Sun. It seemed obvious that our life-giving Sun needed inclusion in the story, which then had me thinking about the whole process of how stars are created and meet their demise - ultimately! I had never considered astronomy as a possible career, or even as a hobby, but my PhD involving exploration into the seasonal cycles for the Southern Hemisphere brought me a little closer to the bigger picture of the Universe - I admit, derived from a spiritual quest rather than a scientific adventure - like that of the Red Dwarf team! Many years ago, while looking for inspiration for another (yet to be finished) quilt, I had been given a large, coffee-table book by a friend called "Philip's Atlas of the Universe" by Sir Patrick Moore, touted as "the best introduction to astronomy" by the Journal of the British Astronomical Association. I first turned to it to look for colour and possible ways to use the many hand-dyed fabrics I have in my collection, which are awash with vermilions and pinks, greens and yellows all merging into one another - fabrics which have not yet found a place to manifest their beautiful potential. It's amazing how hand-dyeing can result in the photos taken  a starburst.  I then found page 174-5, entitled "The Lives of the Stars" (no, it was not a Women's Weekly), with a neat summary of the whole process, from birth to death, complete with images. the latter gave me all sorts of licence to play around with colours, and I had already started a small collection of circle templates to cut from - again using the fusion technique. So I was away, many small planets came to life in front of me. Later I would choose which ones would be used and where positioned.

This is my summary of a star's life, as gleaned from the Philip's Atlas (2003, London). Starting with a collapsing cloud of nebula material, stars begin to form with the rising temperatures, revealing a cluster as the associated gases are blown away. The cluster is gradually disrupted and becomes a loose stellar association. Stars with high mass are of the solar type, remaining for a very long period until they start running out of hydrogen ‘fuel’, causing them to expand and become a ‘red giant’ (not dwarf!). Following the gradual loss of the outer layers, resulting in the formation of a planetary nebula, the core of the original star is left as a white dwarf that continues to glow until the last of its heat is lost. It then becomes a cold, dead, black (not red!) dwarf. A more massive star may explode as a supernova at the ‘red giant’ stage, possibly ending as a 'neutron star' or 'pulsar'; if it is so dense that light cannot escape from it, it may produce a black hole. Many of these stages of star formation are included in Jan's quilt. 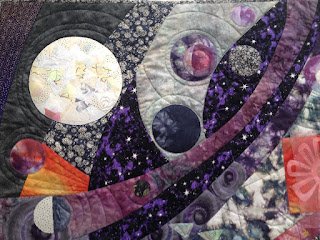 In reading about the various stages and types of stars in my Philip’s Atlas, showing images neatly numbered from one to fourteen, I am drawn to some of the small leftover scraps showing irresistible potential to represent another ‘stage’, maybe another galaxy. They are just too interesting to ignore. When all these stages in the life of a star have been allocated a virtual position in the ‘outer space’ of the background, (nothing is fully fixed in place yet) I go back to what seemed to be most important in Jan’s love of stars and galaxies, the cluster known as the Pleiades. I have been searching symbols on the internet, but so far the means for its representation has eluded me, which is becoming a source of frustration and also a tantalising challenge. I also need to consider how this cluster may be seen from the Southern Hemisphere, when so much of recorded knowledge emerges from a Northern Hemispheric point of view. Maybe there is no difference?
Posted by Annabelle Solomon at 12:34 AM No comments:

After quite a long break away from my blogspot (due to health issues), I'm returning to the creation of a story quilt made for Jan Roberts as a commission, where I am picking up from the previous post entitled 'Background noises'. I'm now describing the stages of populating the background with the symbols Jan had requested be included.

When it’s time to start working with the symbols for the surface of the quilt, their shape, design and placement, I find that these three aspects constantly interact with each other, creating a lot of chaos, indecision and unrest – all part of the process, I keep remembering. Perhaps this is a Beltane moment in creating, when everything is active and in constant motion.

The symbolic images of a Cancer birth sign and the Pleiades star cluster, requested by Jan, are filled with meaning and imagery, both visual and metaphoric. Then there is the moon’s cycle that gives rise and fall to the tides, I know to be very important to Jan’s spirituality.  As are the various phases of the moon, Earth and Sun relationship is an essential element; and then I start to think about the life cycle of a star. Fireworks do seem to be an appropriate expression of the creation of the Universe, though at the moment their representation is the least of my concerns. Sparks have been ignited from my reading of the stories that abound about this seemingly quite significant star cluster, the Pleiades, but the way to represent these seven sister stars remains elusive, and actually does not become manifest until the very last.[1] Meantime I continue to do the research into the content Jan would like to see represented in her story of the Universe quilt, seeking visual form for these symbols – colour, shape and size – as well as how they connect to her life here in the continent we call Australia.

As is often the case, I decide to start with the moon phases. The four phases I propose to include are the full dark, the new moon, a half moon waxing into a full moon. Beginning with a large empty pre-cut circle of calico, I start by overlapping many tiny triangles, another symbol of the female principle in Creation, cut from a wide selection of pale fabrics – laces, synthetics, scraps cut from scarves, all prepared with a fusible agent on the back, and then ironed into place. This way the face of the moon is built up; it is very large, but scale is not something I can deal with in the process of making the symbols, which will likely depend on final placements. I have also cut a full black moon from a single hand-dyed piece, and again I remain prepared that it may not be the final size - though both do so in the end! 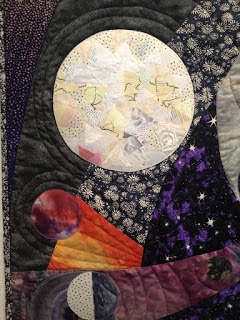 Like the symbol of the pubic triangle and the Female Divinity, the plan to attach the moon using a piece of netting derives from ancient story and understandings. The symbol of the net is very ancient, hidden in stories from around the world, the most significant for me being the fact that a net was placed over the ‘omphalos’ at Delphi – and can be seen in sculptures that represent the ‘navel’ of the world in various places around the Mediterranean, as well as in Aboriginal rock carvings. The mystery of the transformative spirit in Creation is symbolised by these multiple ‘geodisic markers’ of the birthplace of the Universe. Nets are embedded in so many stories of Creation told by peoples around the world. Their physical construction represents the apparent contradiction of holding while also releasing, of exploring while containing. Metaphorically, they tell tales of the subtle and versatile, presence and the invisible, where past, present and future, time and space meld to make Creation manifest.

[1] Munya Andrews, (2014 ed), The Seven Sisters of the Pleiades: stories from around the world, Spinifex:Melbourne 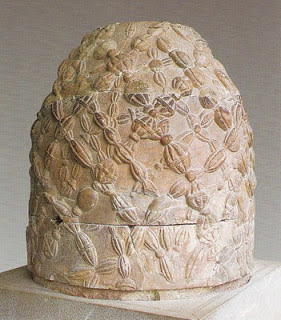 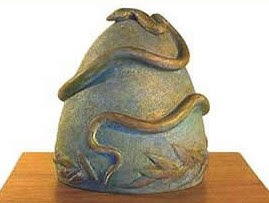 Delos omphalos, which alternatively has the snake forming the creative 'net'
Posted by Annabelle Solomon at 11:49 PM No comments: