The quilt was worked on over a period of several years, particularly being reworked from an original one piece to present as a diptych. I wanted to create a sense of a journey over distance and ever-changing horizons, by using overlapping colour contrasts and a perspective of looking down from overhead. (It has since made me wonder if Indigenous First Peoples already had what we now know of as ‘drones’.) The technique was experimental, having never used two-point turns in order to ‘embed’ one fabric into another, so that they become individually integrated while forming a whole piece… like meeting horizon after horizon, each different, but embedded in the whole experience. Where to place the integration was significant in the overall interaction of colours, shapes and design, but that was only one level of relationship with the quilt’s development.

This quilt is a special part of my spiritual connection to land. It gifted me with a very real experience of being at the ‘crossroads’, between what we think we know and what we don’t know, other than through our intuition, which we don’t always listen to or even trust. After completing the pieced whole as a background of the journey’s changing landscape, the trees of the lake were placed in stark contrast to the blending layers of horizon upon horizon and found their way into the quilt as black sentinels, standing boldly in a 360 degree radius around the parameters. To bring it all together, the close tyre-like, long quilting of the three layers at the centre of the diptych also helped bring the two little pieces together, and of course gives emphasise the long straight roads we travelled. The cross-hatching of the quilting helped to represent the division of land areas needing fencing through ownership, and showing crop differentiation.

On our way back to the mountains we called in to the town of White Cliffs. It was a wonderful experience to see a town living on the energy supplied by solar panels installed on the fields outside town. And to go into the underground tunnels dug out to create a local home, to stay as guests with a couple who lived that way permanently was very special. It felt very comfortable to be living underground, in the nurturing embrace of mother earth, fostering and protective. We went up to the town to get some food for evening dinner, and came back to realise that there was no television reception – no cable reception to watch Cathy Freeman win the 400m sprint for Australia – and Indigenous Australia! Such is life! It was nevertheless amazing to experience living in a cave, even if only for one day and night. Very special indeed.

Here is the final version of the quilt, “Road to Menindi”, front and back. I am pleased with the outcome. Also the backing, from home dyes, evocative of landscape, waters and night skies. As mentioned in earlier post, I’m moving onto finishing a small quilt celebrating one aspect of the natural heritage we are lucky to live within in the Blue Mountains our hanging swamps. 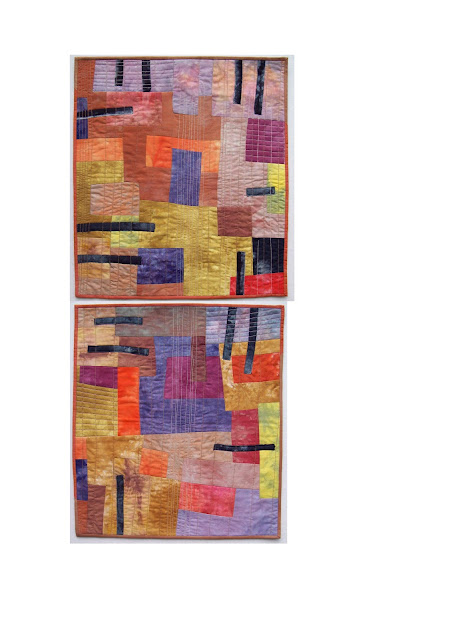 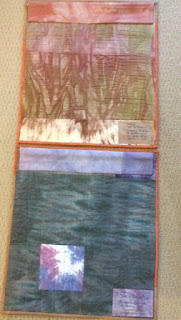 Posted by Annabelle Solomon at 11:30 PM No comments:

The Menindi quilt has been on my mind, since hearing so much about the destruction and horror that the Murray/Darling river system is in at the moment – dead fish by the hundreds of thousands, and dry riverbeds on our television screens. The beautiful Menindi lakes, about 100 kilometres outside Broken Hill, are bone dry. It is mostly being blamed on the long drought east-northern Australia has been experiencing for several years now, though there may be other causes to take into the equation, such as mismanagement or even corruption by government officials.  There are now calls for a Royal Commission into this ‘natural’ disaster – which may not be due to only natural causes.

Leo was in Year 6 in 2000, the final year of Primary school when we set out on a road trip to the Lakes.  We did not know what to expect on arrival in Broken Hill over two days of driving along very long and straight stretches of road as we headed to first stop, Dubbo, then on to Broken Hill where we stayed for the night, and played miniature golf the next morning. A friend had offered us his caravan site to stay in at the Lakes, and after the excitement of switching the little purple Terrios into 4WD mode to drive across corrugated roads, we arrived late in the afternoon, just in time to walk down for the sun setting over the lake, and the dark trees standing dead in the lake, presenting a stark contrast to the gentle, pale hues of the evening sky.

I had borrowed a video camera from the school I was working at at the time and Leo opened the car window on his side, recording the changes in vegetation as we drove along that straight single-lane road in either direction towards our destination. There were a few dips and crests, but after coming up onto the horizon at a crest, there was more of the same: open blue skies, open farmed paddocks and more of the same straight single-lane road heading into an unknown distance. It was tarred, so a smooth ride, with dips and rises that would somehow make this outback roller coaster ride even more extreme. It seemed to be taking a road to nowhere, with the only alternative indication being intermittent and remnants of road signage, in which we placed our trust. We wondered whether this straight line could actually lead to a final destination!

There was the almost overwhelming presence of just being where you are seemed to obliterate the feelings of past and the future. Being constantly at the horizon was a meeting place for both past and present – suspended in a sense of timelessness, no doubt induced by the passing landscape of an ancient land, albeit brought under the rule of Western agriculture through crops of wheat, canola, and the rampant and feral ‘pest’ of purple weed, supposedly introduced to feed stock, now known as Patterson’s curse (sometimes Patterson Jane). 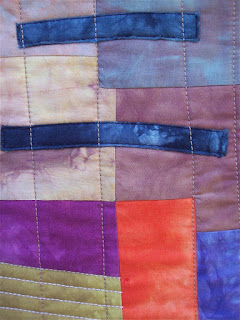 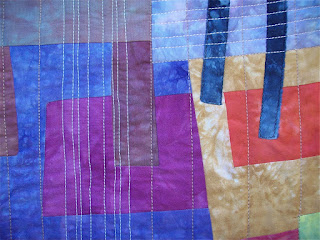 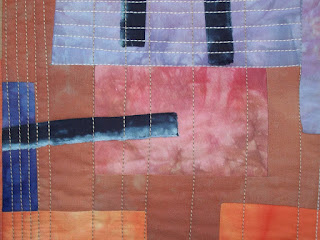 Though the outback is often thought of as monotonous and monochrome, the experience of travelling through this 'wide brown land' presented other perceptions. Variations in trees and flora along the roadside were evident in the variety of shape and colour. After watching Leo’s road video many times over to get a sense of the colour variations we encountered during this more than 1000 round kilometre trip, I went to my stash of home dyed, plain fabrics to find the subtle colours of various agricultural crops, the natural eucalypts and wattle blooming in September, and most especially the red, red earth. These were the ‘on the road’ colours. On a side trip out to the small but fascinating nearby town of Silverton, (where some of the Mad Max series was filmed), we could see large spreads of the ground cover, the Sturt Desert Pea. The contrast of the deep red and black pea flowers to the empty space of the ochre soil was quite breathtaking, and of course has been included in the quilt. And then there were the beautiful horizon skies over the lakes on our return to the caravan at the end of each day’s jaunt.
In my notes I wrote: “at sunset the going down of the sun reflect her fierceness, as well as her gentler moods – both aspects serene.” (see next post for the final outcome) 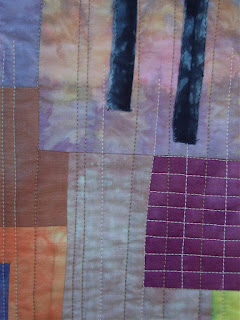 Posted by Annabelle Solomon at 12:41 AM No comments: