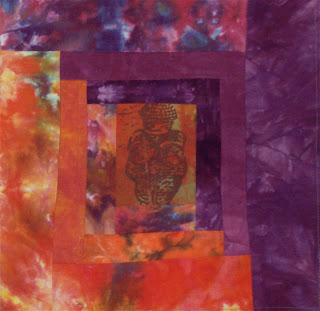 ‘Earth is our Mother’ (7/7/11)
Small block (12 x 12”) with stencil of Goddess of Willendorf in centre.
This block  is hardly a 'major' effort in creativity, but I felt very strongly about doing a block to be part of this wonderful (I suspect) worldwide quilt project, which aims to "Gather the women" to 'bring together the visions that women the world over have for Mother Earth... into a beautiful quilt, shining the energy, love and vision... to help heal her - from my heart to your heart to the heart of Mother Earth.'  It was dreamed up by Enrica Mallard in Eltham, Victoria, Australia - and is still going, if you want to add a block! Enrica will even post you the calico backing if you want (see website below). I love the image of the Great Mother Goddess found originally at Willendorf in Germany 100 years ago; they put out a stamp to commemorate the finding, and many hundred (thousand?) replicas of Her have been found throughout areas named as Old Europe by Maria Gimbutas. I'm glad to again be able to use the silkscreen print made by friend and artist, Sue Swanson, many years ago now - I've almost finished them now! This is what I wrote to go with the image:
I love having the opportunity to share my vision for Mother Earth, infused into cloth, with the combined visions and energies of other women. For me, the mini sculpture of the Great Mother (labelled in the world of archaeology as the ‘Venus of Willendorf’) at the centre of my block, represents a vision of powerful and embodied creativity (not just ‘fertility’ as physical re-production), but caring, of self and other, and respect derived from mutual respect. She is housed by the movement between light and dark, the movement experienced through the seasons and observation of Earth’s moon.
Women’s Visions United for Mother Earth
www.womensvisionsunited.com
Meantime the magpie quilt for Jan is still germinating in the dark of the imagination!

Posted by Annabelle Solomon at 10:07 PM