It has been over six months since last post, due to another perhaps more serious health issue that, since February 2016 has resulted in my attending the Day Suite every three weeks at the Skin Cancer Clinic of Westmead Hospital, for immunotherapy treatment. Tomorrow will be the twelfth infusion, and my hope is that it will, if not destroy the melanoma lesions in my liver and lung, at least keep them in check - as it seems to be doing for now! I've decided to post the story of the little quilt completed for Sheila in April, before having finished the earlier story of Jan's Universe story quilt, because that is quite a longer story, and may take more thought and time to pull together. So here is the creation story for a quilt commissioned by Sheila at the beginning of the year....and more to come soon with a look back at 2015 for Jan's story quilt.


As I go through my rather well ordered stash of fabrics I think to myself that I must have thought I was going to live forever – or perhaps have many future lives. The colour combinations of the fabrics as they are grouped in the plastic tubs remind me that when I first saw them I most likely had a project in mind, which then floated off into the ether. I started quilting (and collecting) in 1994, 22 years ago, so my stash is quite extensive! I think it is indicative of my birth number. Being a number one, I am typically an initiator, a generator of many ideas, and dreams maybe. The latest quilt for Sheila began by resurrecting a collection of small swatches made several years ago to try out the technique of raw-edge appliqués, both positive and in reverse: that is, applying shapes to the surface, and cutting back to reveal the fabric hidden beneath. These swatches of gum-leaf shapes and colours were made a while back now, but seemed to fit Sheila’s general idea for a ‘tree scape’ - something to celebrate her love of trees in the bush. I had started with the idea of more distant landscape, but when I showed the sample swatches to Sheila, she liked them. So, the focus zoomed in, and the more serious work of design and further construction began.

More swatches were made, using the same fabrics from my collection that I’d begun with: hand dyed cottons, many by Dianne Johnston of Queensland. I wanted the leaves to continue to dance in all their shapes and sizes, in the light of bright sunshine and mottled shade, coming to the forefront and blending back into the dense Australian bush. I wanted it to show the rather wild variety of colours each leaf goes through until they finally settled as leaf litter to nourish the Earth that gave them life and form. Here is the final result: a leaf medley for Sheila, which I called “See through Me”. 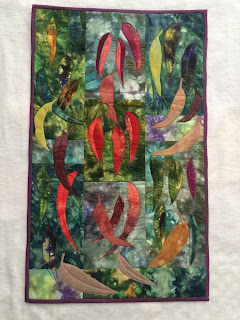 As a result of the quilting process, gum-leaf outlines are scattered across the back of the quilt. For the dedication I decided to use a screen-print done many years ago by friend Sue Swanson, based on an image from the “Swinging Bridges” series of Goddess images, published by dear friend thea Gaia (then Rainbow) in the 1980s.  Originally carved from Phoenician ivory in the 8th century BCE, she has been stored in the Iraq Museum, Baghdad, (- and sadly, may no longer exist). She is now printed onto fabric, has an open face, showing a serene and all-knowing smile.  As a goddess worshipped by early Middle Eastern peoples, ‘She’, (the one who is known by ten thousand names), represented the power of the feminine principle in divinity, and was given the attribution of being the Creatrix capable of seeding all possibility according to her wisdom.

For this quilt I chose to honour the spirit of “She-of-Ten-Thousand-Names” with name she was known by, Astarte, she who is the See-r, with the additional invocation from the publication: “seeing with her vision, following her line of sight – we reach beyond boundaries.” It is an invitation to realise that 'there is more than meets the eye'; to see more, allow more in through the eyes and become more finely attuned to 'seeing through' by becoming more open to the reality of our interdependence with the natural world. It is the leaves from trees that give us the oxygen we need to breathe, for example, rather than trees as commodities from which to make reckless financial gain, one way or another. Derived from other more ancient wisdoms of human life in relation to the Earth as our home that I had come across in researching ideas for Sheila’s quilt, I included this thought: “The land does not belong to us…we belong to the land”. 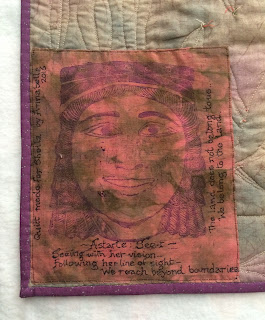 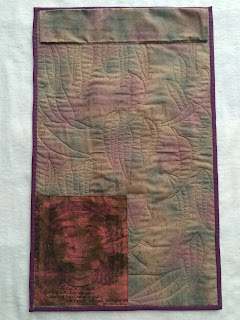 Posted by Annabelle Solomon at 12:48 AM