The living Universe: Matrix of creation

One of the most compelling glyphs relating humankind’s understanding of our place in the Universe story is carved into a rock surface at the end of the long passage leading into the Neolithic mound of New Grange in County Meath, Ireland.  The glyph is symbolic of the Earth’s relationship to the movement round Sun as observed by early peoples living in that place.[1] The symbol, looking like the petals of a daisy was clearly based on astronomical observation, in particular the rising of the Sun on the day of the Solstice in mid-winter, hence representing the promise of life returning - a predictable reward for the belief in and expectation of new life based on such observations. Its eight ‘petals’ clearly identify the change in natural phenomena over eight annular seasons. Returning to the original symbol of the omphalos, the navel of the Earth (mentioned in a previous post), the representation of the glyph on the quilt with appliqué is partially covered in a mesh of fine net, perhaps represented also at new Grange in the grids of the rock carvings. Below the glyph, the Sun’s giant orb glows in the distance and our fecund blue planet puts forth a carpet of flowers in the shape of the ‘vesica piscis’, the sacred oval/almond (or mandorla) shape of the Yoni, the female vulva and uterus. Mother Earth is flourishing in response to this deep relationship with Sun. And the pull of Moon in her orbit, giving us the ebb and flow of the tides, is shown in the waves beneath the blue planet – and the Pleiades are also associated with water in the Australian Indigenous tradition. Other prehistoric traditions used the lines of the meander (or zigzag or ‘M’ sign) to represent water, which I considered, but preferred the ‘flow’ over the geometric for this composition.[2] 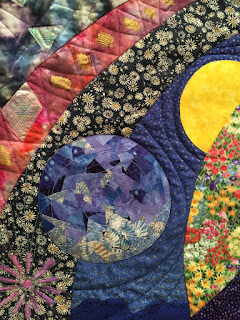 Final placement of the Pleiades cluster was never really in doubt; it had to be central, though the means for representing the Seven Sisters in fabric was very elusive. I discarded the grid-like construction on netting, inspiration for which came from the grids carved into stone at New Grange, and went back to images I had researched. In the end I decided to use gossamer-type fabric, with a sheen and rainbow threads running through it, which had a feeling of distant bodies glowing, as though covered in shimmering icicles. I used the image of Nut, Egyptian Goddess of the sky who swallows the Sun at night and re-births it everyday in the dedication on the back of the quilt. Nut reminds us to leave space for the Mystery of this unending cycle of dark and light in the weaving of our lives.[3] This is the quote I included:
By the reckoning of the Living Universe cosmology, all things – all beings – including stars, planets, humans, animals, plants, rocks, and rivers – are both expression and agent of the spirit, each with its place and purpose in an epic journey. Earth and the material universe of human experience are more than the spirit’s creation; they are its manifestation. The spirit is in the world, and the world is in the spirit. [4]

Below is the finished piece, measuring 940 x 705mms. I believe that calling it The living Universe: Matrix of creation, reiterates Jan’s spiritual connection to the universe. This is the final post for this quilt. Next quilt blog: Charge of the Goddess. 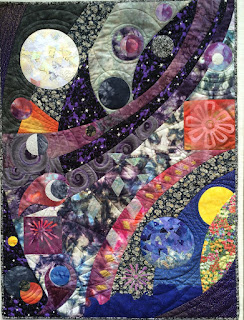 Posted by Annabelle Solomon at 7:07 PM