Goddesses: last two in my quilt

Two enigmatic faces: Astarte/Asherah (Kalili) and Medusa
The “look at me” moments coming to us from antiquity, (minus the ‘Kath n Kim’ recriminations of women) in Lilith, as the goddess image is developed in different ways by the last two images to be discussed here. There are two faces at the bottom of the quilt, on the right and left hand positions, both enigmatic and full of the paradox that is life as it is lived. Like the other goddesses in the shrines, they contain and hold the Mystery that is Goddess knowledge (I use the term ‘gnowing’, with the inflection of knowledge gained through insightful intuition, observation and experience) embodied through differentiation without losing a sense of an organic, living and sacred one-ness in which all participate. They are the Medusa and the so-called ‘woman at the window’, who is also named as the Mona Lisa of Numrud, for obvious reasons – the latter for where she was found, and the former due to her gorgeous smile, one that extends to her eyes –and tongue. Of course, both titles have been super-imposed by the limited and limiting patriarchal concept of women and their roles in society.

The Sumerian name of Kalili is assigned to this Mona Lisa, though she is likely be associated with Astarte and Asherah, mentioned in the Bible. The name conferred by thea in the card appellation is “Seer”, and looking at her image, while recalling the name of the women looking out of a window, it is not difficult to understand why she chose this title. She is very beautiful and does appear to gaze directly back at the viewer, unabashed and clearly with insight. 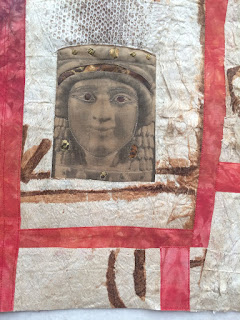 The one image on the quilt that perhaps stands out from the others, being on her head (bottom left hand row). She is of course Medusa, perhaps my favourite, since she is so ancient, so powerful, and so humorous in her way – with her eyes bulging and tongue sticking out in derision and ‘gnowing’, her head full of writhing snakes. Be afraid, be very afraid – because she is in charge!

Much maligned as she has been over the millennia since the onset of deliberate, concerted and through the continual patriarchal project of demonizing women, she has offered herself as a role model. Though they have succeeded in belittling her through inverting the story of her as protector, her ensign was marked on battle shields to instill fear into the opponent, to turn the enemy ‘into stone’ in battle – I wonder if that story worked. As might be expected, the final version of this evolving story goes that the ‘hero’ Perseus had to conquer her completely by cutting off her head through a clever and insidious ploy of smoke and mirrors. No more powerful snakes to instill fear – or respect!

A short text from thea accompanied each of the images, as can be viewed in the previous posts. During the quilt formation I quite coincidentally uncovered four lovely postcards stored in a box and sent to me from thea Gaia when she was visiting the underground cistern to the Basilica in Istanbul. They showed two very large renditions of the Medusa’s head, placed at the bottom of huge columns originating in the Roman conquest of Constantinople (not Istanbul) over 1600 ago. One is standing on her head, the other glancing up sideways at the visitors to the place. For thea, Medusa represents the “Mystery” that always is. She had a wonderful way with words, and had written her words of wisdom on the back of the postcards, remembering my birthday at the time of her visit to the cistern. She wrote:
…as you go into the Mystery of the underground may you go into the Mystery of your underground self and celebrate your own being. And do not be surprised when you find a Medusa there, at the foot of a column, looking up into the world above.

The obvious question is why is one upside down? Thea’s answer:
…she is there to keep her eye on Mary in statue and fresco form in the building above her – “next door” – and to give acknowledgment to the innerness and outerness of us all.
And thea’s reflection on the other Medusa head, which is looking out, curiously sideways? She suggests that she ‘continues to look within and wonder, reflecting on the Mystery of the divided world in which we live’, adding a short mantra…
May we recognize her wisdom and her power and her presence waiting to be confirmed in our depths. 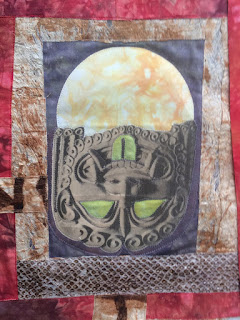 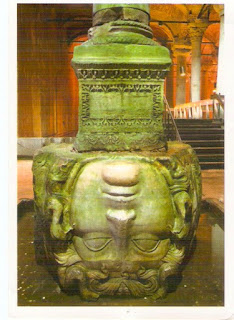 Posted by Annabelle Solomon at 2:06 AM