Earlier this year, on 29 April, I started a blog post about the creation of the quilt from a jellyroll of Indigenous style prints that I’d bought in Alice Springs, as part of our journey many years ago to places that we Aussies lump together as “the Top End”. I can now reveal that the final quilt is resting on my own bed, and I am so delighted to be resting underneath the “Makarrata” quilt on these cold nights. It started out in name as “The Uluru quilt”, and since then I have decided to call it “The Makarrata quilt”, the term used in the “Uluru statement from the heart” of 2017, meaning ‘coming together after a struggle’ – such a discussion cannot be put blithely aside by our ‘governors’, as though such a thought was some sort of ‘invasion’ into a sovereign territory that had not already been invaded. On a personal note, it is also relevant to how this quilt finally emerged, after having been put to one side whilst I was dealing with breast cancer, followed closely by treatment for Stage IV melanoma over the past three and more years.

The quilting design I originally started with has been continued into the borders the colour of which reminds me (almost - in reality, much redder!)) of the sands of the 'red centre'. They were added on to make the dimensions for a queen-sized bed. I love snuggling under this blanket of fiery warmth at night and waking up to the bright colours. It might have to come off when summer hits! (By coincidence, I have a very bright linen set that seems to go very well with the quilt's colours, as shown here.) 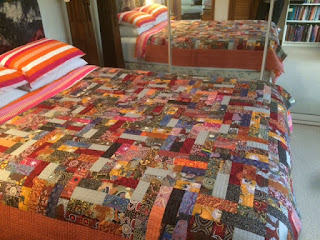 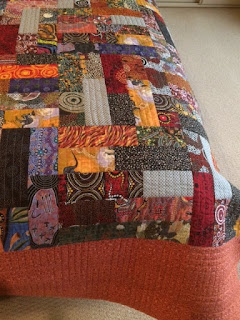 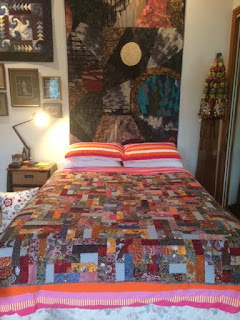 Posted by Annabelle Solomon at 11:24 PM