EarthDownUnder: quilt for Louise and Mick 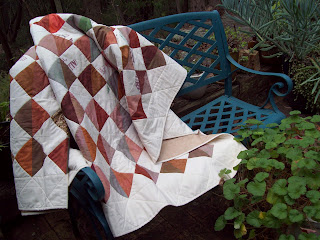 When I started working on a double bed-size quilt on commission for I thought it would be a fairly straight-forward process. The proposition was really quite simple and honest: earthy colours on a cream background, using a grid formation of about 5 inches. Great, I thought: a project I don’t have to ‘think’ about too much. Unlike the personalised quilt made for Jan, which required visual interpretation of a her story based on life events through values were questioned, re- formed, and were inherent to Jan’s sense of self and well-being – which I have to say I loved doing.

The way I work for a creative piece is fairly random, free-cutting to create the ‘fabric’, which provides a sense of freedom and sometimes the unexpected appears and leads in another direction. I then look at how each piece looks, decide where it fits in the assembled pieces to elicit a ‘mood’, or the falling of light (as in some of my scenes for the ‘backyard series’ for example, which can be seen on my website), which can be very exciting – especially when using the variations in hand-dyed fabrics. But it is a very different process from this brief, as I was to find out.

Using lovely hand-dyed fabrics (mostly obtained from ‘Dyed and Gone to Heaven’) in earthy colours to assemble blocks on spilt triangles surrounded by the cream seeded home-spun. As I usually do, I simply took the fabric and started cutting, though this time with a ruler – a big mistake I was to find out! Thinking I had it cornered, I started by cutting the 4 ½” squares in half to mix and match the colours. and quartered the square of the cream background to provide the triangles to go around each corner of the pieced colour triangles set on diagonal. Trouble was, the coloured triangles were being joined down the centre on a bias, and the cream corners left all edges of the block on the bias – horrors!

I do understand and appreciate that there’s a lot to be said for the beauty of mathematical precision, (especially in engineering) and also in having all the points butt up perfectly to each other on a quilt. Annoyingly, creating the blocks had led to each one varying slightly; sure, only by about an eight of an inch – doesn’t sound much, but just enough to be very frustrating when joining them! I started to see that problems might be encountered when joining a bias to a bias, or the external edges of a block were on a bias – such that each block required re-measuring and trimming in order to join them to achieve any sort of precision. So, I did have to ‘think first cut later’ after all – measurement wasn’t all it seemed!

It was the first time I’d used regular blocks for quilt creation in many years, and I knew there had to be a secret about the cutting process! I rang my friend Val Nadin, also an art quilter, and of course she had the answer: use the ‘golden rule’ by adding 1 ¼”(to the finished size) to create 4 triangles; the outside edge can then be used to join 2 colours down the centre on the straight to form the lozenge centre of the block. So, the colours were cut as 7” squares, and quartered diagonally. When the quarters were joined it resulted in a 4 ½” square made from 2 contrasting colours.  Adding 1 ¼” to that, I then cut 5 ¾” squares in the cream, which when quartered and joined to the 4 corners of the diamond, produced a block measuring 6 ¼” unfinished, and 5 ¾” when the blocks were pieced. I know it seems like doing the mathematics back-to-front, and to an extent that is what I did, because I’d already created quite a number of blocks (with the bias join down the centre) that I didn’t want to discard.

Although Lou’s quilt is geometrically structured, there is still an element of the ‘random’ in the way the colours fall together within blocks, and when they come together. This was accentuated by the use of Australian feed sacks, which are used to package organic grains. The edged cream pieces with partial text on them come together also came together quite mostly randomly, with some moves occurring when I laid them out and took a look at the connections of course! 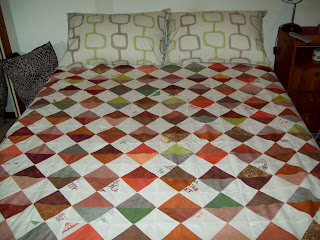 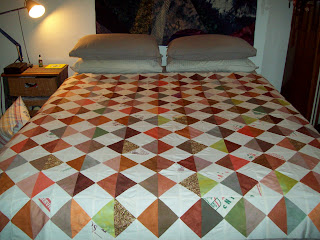 Although there were several hurdles to be addressed in the process, and I may not have got it totally right, all in all, I feel the desired outcome has been achieved: a fairly small overall pattern on a cream background (with the added interest of text), using earthy colours and tones. The backing is also very simple and earthy. It is made from all cotton fabrics and batting is 100% Australian cotton, and looks lovely sitting on the bed, either horizontally or vertically.
Posted by Annabelle Solomon at 2:24 AM