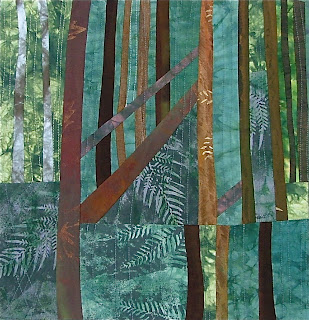 One of my ‘backyard: Blue Mountains’ has arrived home after well over a year touring to different venues in Australia. It was lovely to see it back - and I would have been equally happy had it sold! The exhibition of small quilts was sponsored by Ozquilt Network Inc (http://ozquiltnetwork.org.au). In the previous blog I mentioned this quilt as an example of the free-cutting process I often engage in while creating a quilt. This series of small square quilts is very different in dimension to the double-bed size (approx 6’x6’) for Louise and Mick. Each square measures just 40cms (16”x16”), and I’ve tried to pack a mountain landscape view into each one.

I mostly use hand-dyed cottons, but some commercial fabrics often find their way in; the mono-print fern is my own. After completing four squares they formed a “four-patch”.  I had hoped to get to a nine-patch formation, but doubt that that will happen, especially now that 2 of the original four have sold, (not to mention working full-time). They express my feeling of deep connection to the land I live on, in and with. For me they are a way of getting to know my environment better, as well as being a type of veneration of the Mystery of Being as manifest to us here in our corner of the universe, and in particular my area on planet Earth, the Blue Mountains of New South Wales.

The next Australia Wide (#3) will be launched at Fairfield city Museum and Gallery, being exhibited there from 4 October to 25 November 2012, and again travel widely.


Posted by Annabelle Solomon at 10:09 PM