The Earth Said: Sheila’s personal quilt
This little quilt was designed for Sheila’s 70th Birthday, which occurred on July 4, 2014. My friend Sheila is a Catholic nun belonging to the Presentation Order of Sisters, from the Wagga Wagga. With almost 50 years of service, her commitments, experiences and achievements in the service of her fellow human beings form the ground of her being. I had heard quite a few of the stories, but spatial limitations were a concern! Thankfully, according to Sheila’s directions the quilt became about A3 in size, and contains 3 motifs she requested: trees; the moon and water (for her birth sign in Cancer); and wolf, her spiritual totem (and I suspect what could be described as her inner daemon).

Sheila has lived in the Blue Mountains since 2000 and become deeply embedded in and embraced by the many local and wider communities she continues to serve locally today. Over the years, since meeting at the Seasonal Rituals held by GlenYs Livingstone, we have become friends as we journey on our personal spiritual paths, which have many similar directions: in our study of the Universe Story, in the sharing of Goddess stories and love of the environment.


With a sigh of relief after content and size of the ‘brief’ was established, I started to think about design features of the future quilt. Living in the beautiful World Heritage area of the Blue Mountains, it is impossible not to be aware of the wonderful imposing eucalypts, so many different varieties in such abundance. 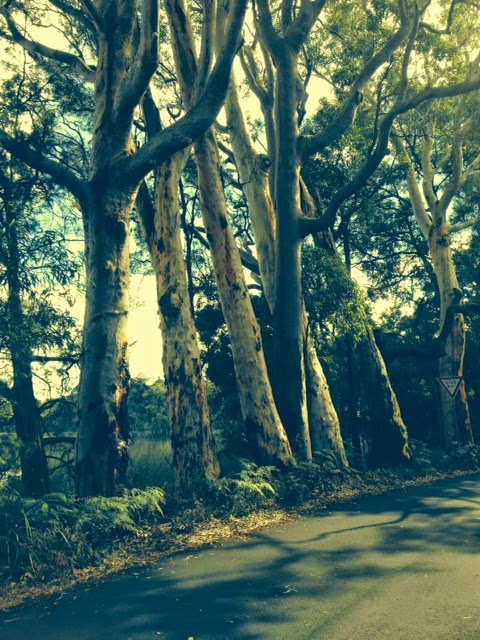 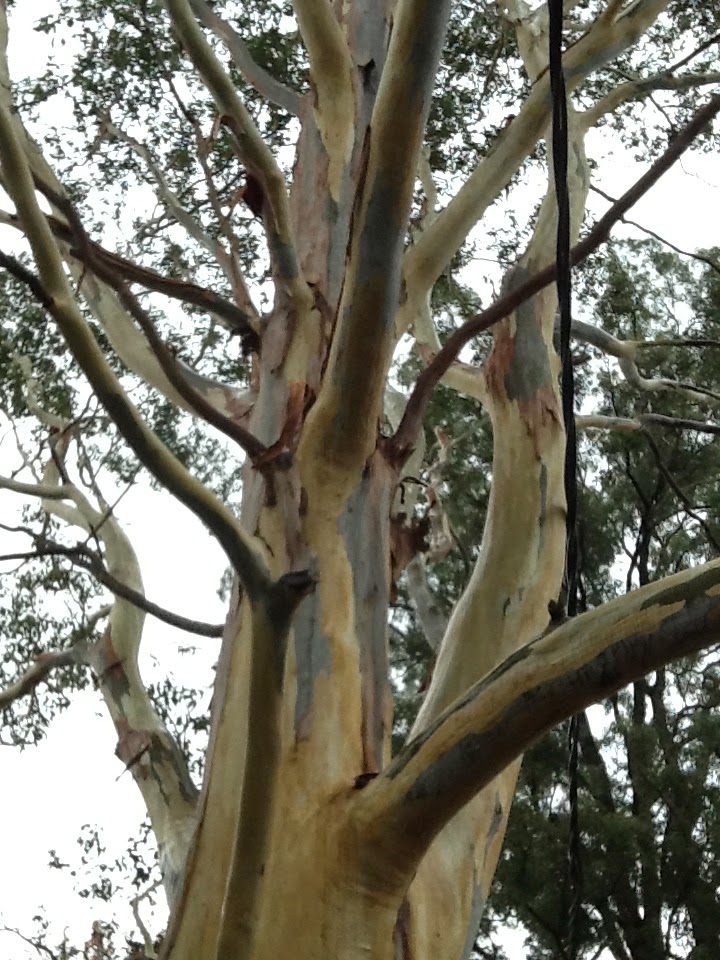 Creating the “tree of life”
It became clear that the focal point of the design was to be a “tree of life” – at once representative of Sheila’s amazing life’s achievements and the bigger notion of Life as we experience it on our Earth. Over a few months I had taken photos with Sheila’s quilt in mind. Next stage in design emerged with the finalization of the angophora to represent the Tree of Life. The final form of the angophora is based on the magnificent specimen in my front yard – a choice made by Sheila, after I’d presented her with several drawings of eucalypts. As a species, the angophora is distinct from the genera of the eucalyptus, of which there are over 750 varieties. The positioning of branches lead the eye up from the massive trunk towards the limitlessness of space – a space taking the eye and mind out into ‘the Universe story’. As serendipity would have it, came across the poem by Lauren de Boer called “Earth Said”, which I had hidden away in a folder somewhere. It seemed to me to express Sheila’s achievements, challenges and aspirations, and went on the back of the quilt together with the dedication.

Be like a tree. Stay rooted in the dream.
Give yourself fully to the changing seasons.
There is a time to leaf and flower,
A time to release and be dormant.

“The Earth Said”: a poem by Lauren de Boer (with minor alterations of names of trees for the Southern Hemisphere.) 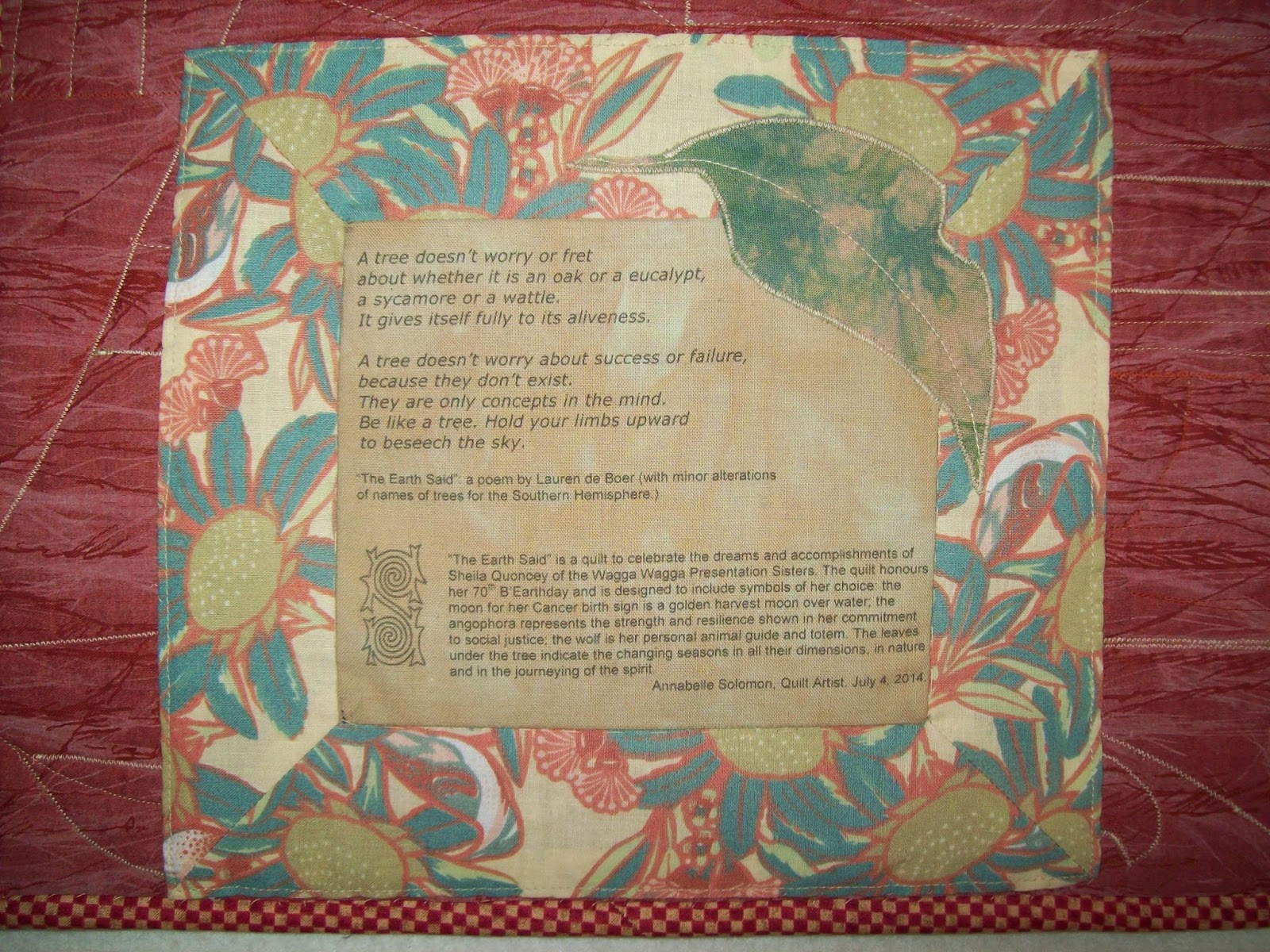 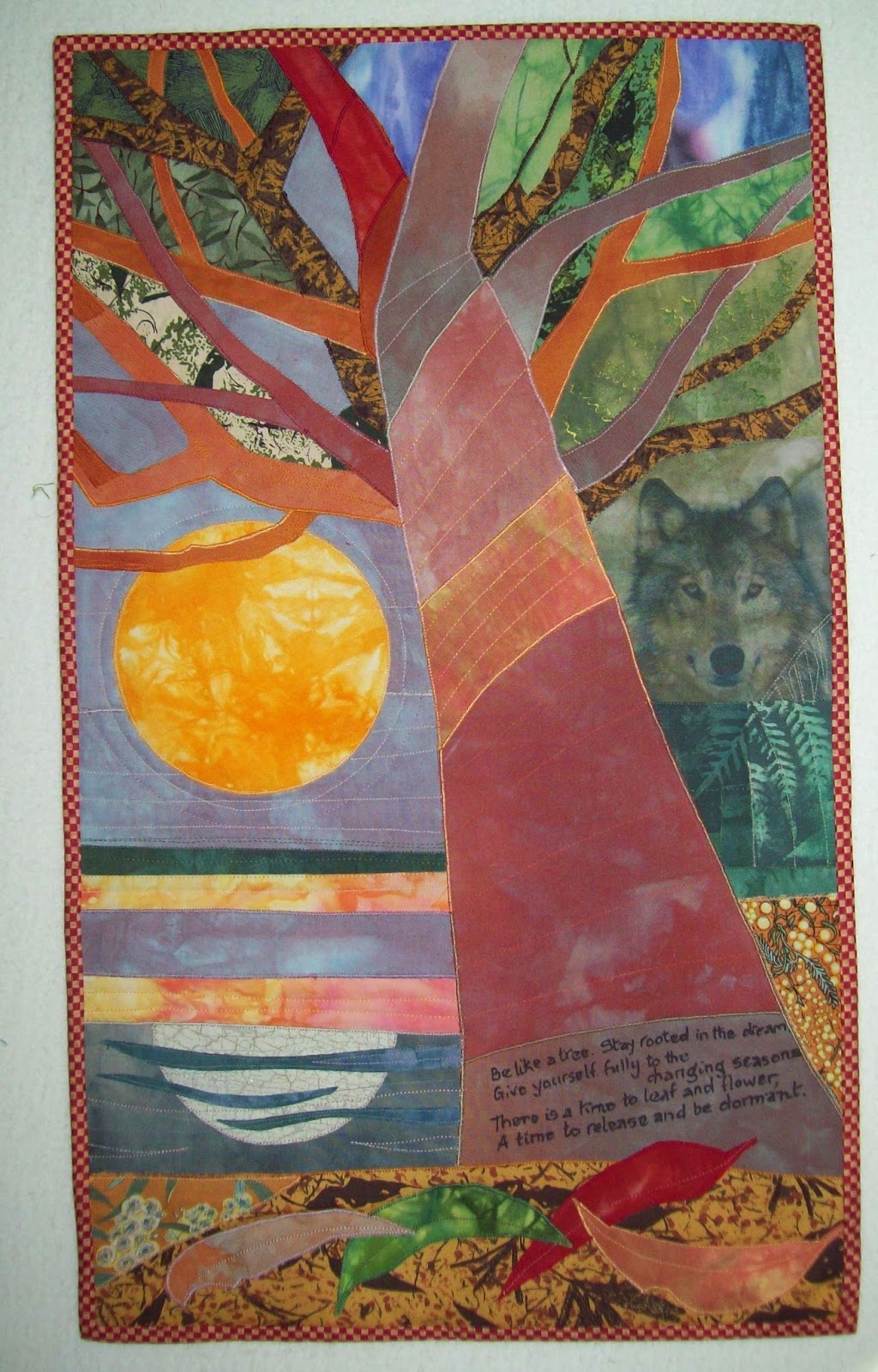 Moon and water are the symbol and element for the sign of Cancer. Moons more often than not feature in my artwork, often showing several of the eight phases usually represented in discussions of the 28 day cycle from full dark to full light and return. The inclusion of Moon is not just in recognition of her birth sign, but celebrates Sheila’s incorporation of an Earth-centred spirituality into her spiritual life. The phases of Moon’s cycle can also be associated with the cycle of the Seasons and their movement from nascent creativity to fecund fullness. The full moon in the quilt clearly represents the golden harvest full moon (seen before Mabon/the Autumn Equinox), a very fitting symbol for Sheila’s lifetime of service in many communities. From the design point of view, it released me from the notion of having to ‘free cut’, which wasn’t going to work with what is essentially a jigsaw approach to cutting the fabric pieces for this work; fusible relief approach was used for the moon. 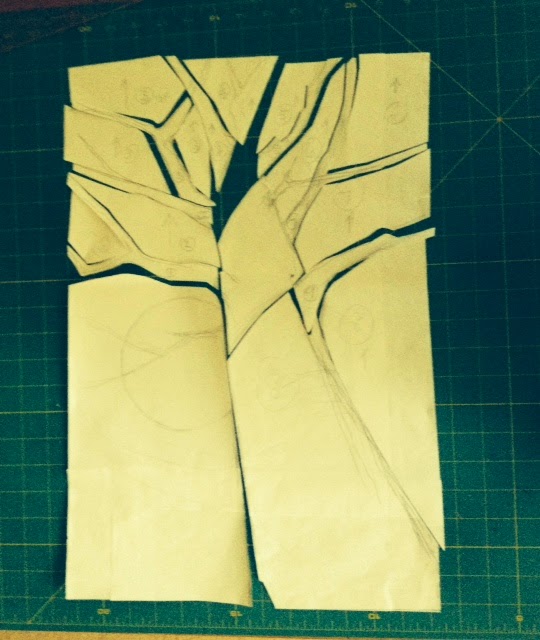 This is how the angophora became translated into a pattern to work with once fabric was selected.

I had been reading about the form of the circle in relation to the gift exchange view of economic interactions, as they have developed and been modified through the history of ‘western civilization’ (Hyde, ‘The gift’, 2007)[1] I realised that the methods for ‘gift exchange’ as they are explored in Lewis Hyde’s book, not only relate to Sheila’s actions in her life, expressed through her vow of poverty, but are very much part of my own ethics about equitable exchanges. The full moon in the quilt, initially included to represent the star sign of Cancer, took up another meaning. From the perspective of the Earth, the diameter of the moon seems to diminish and increase, as the light falling on the moon wanes and waxes. Hyde uses the metaphor of the radius of the circle to define different types of relationships, where the exchange moves between the value to be had in giving through engaging in the “spirit of the gift’’ as experienced in tribal societies for the benefit of the whole community, to the current expression of exchange that is engaged in as a response motivated by an individual’s desire for personal enhancement. In the former, the radius from the self is elongated, until a boundary is drawn through encountering someone ‘other’, outside the group. In the latter the radius has perhaps all but disappeared, such that the ‘other’ is perceived as everyone but the self. Hyde writes of this waxing and waning as a continuum, a sequential continuum in historical time for sure, but it can also be in feeling the pull and resistance of the swing in the present time. It is this indigenous sensibility for inclusion of the other as far as possible that must be at the heart of Sheila’s endeavours.

Wolf as totem daemon
While searching on the net for a wolf image, I came across the blogspot of Susan Hawthorne.  The page describes a visit to a small museum in Italy, north of Rome if I remember rightly, where Susan unexpectantly comes across the image of a wolf woman carved on a small stone dated at 300,000 years before the present – give or take a few! The image has a very clear representation of the pubic triangle, with breasts and arms fold across the stomach. The link is here:
http://susanslambdawolfblog.blogspot.it/2014/01/la-donna-lupa-paleolitica.html
Sheila told me she had been to a retreat in the USA where she “met” her totem, wolf, or perhaps more accurately, wolf came to her. Her totem has stayed with her, providing her with guidance, insights and comfort, hiding protectively here beside the angophora. Final touch at the base of the quilt, is the positioning of four gumleaves, representing the cycling seasons. 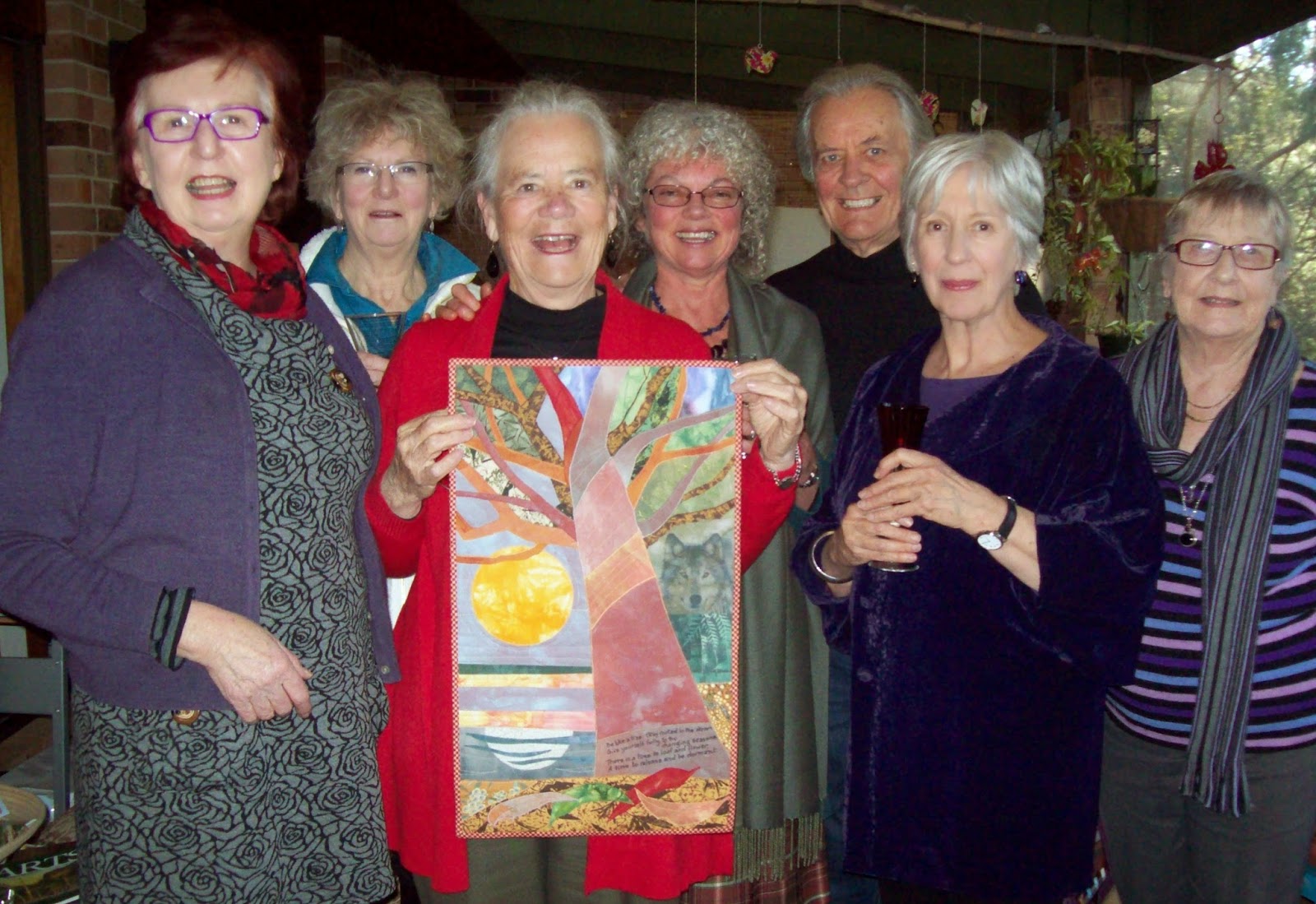 [1] Lewis Hyde (2007 3rd ed) The Gift, Cannongate Books, UK. Although originally published in 1982, this book has provided many insightful moments for me. Highly recommended.

Posted by Annabelle Solomon at 6:20 PM