Hallowe'en takes us into the dark for renewal

The Inner Crone is one we can all get to know. Just like the Inner Child we have come to understand and embrace, she is the old lady who lives in us all – old and young (though they young may need to respond to a few more ‘knocks’ at the door). Old ladies are ‘real survivors, …who have been through everything already, so nothing scares them anymore….who have had their innocence challenges by ten thousand appalling assaults…and who lived through all of it.’[1] The Crone is a character from myth and folklore and has the innate wisdom gained from her experiences and is the guardian of these ‘gnowings’ held in the underworld. Crones represent a death of some kind, but she has no fear of death. In realising our Crone time there are endings, closures and dissolutions, which we begin to see as positive, and recognize the creative transformation of our energies into another radical form. As Crones we also stay in touch with our inner child by exploring openly emerging consciousness of the young. Likewise, it is important that younger women validate and revere the Crone’s experience, wisdom and power.[2] There are plenty of women around from which to take example.

The image of the Sheela-na-gig as she is known in Irish Gaelic, is that of an ancestral Crone. As the Sheela-na-gig, (Lady of the Dance) she was represented in small statues fixed near Church entries in the early Christian era of Ireland and the British Isles. In earlier pagan days she was woven from the last cut sheaf of the field, to celebrate the final gathering in of the harvest. It is interesting how this practice inter-weaves with the story of Persephone and her Kore (daughter), who goes down into the underworld with a pomegranate to “plant” the seeds for the regrowth of another new harvest by feeding the dead souls with its seeds. Needless to say, the celebration of the holy hag’s day was the bipolar of that of Brigid, who is also honoured as the Creatrix – just at different stages on Nature’s cycle. 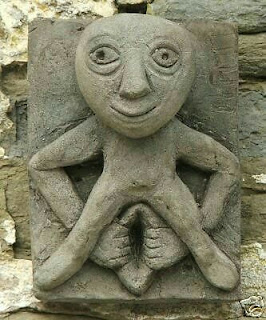 The Wise One, or Cailleach to the Celts is a Sheela-na-gig, a dancing hag who knows the secrets of the Universe, is the Goddess of Winter as celebrated at Hallowe’en, the beginning of winter – and she overseas the transformation in nature throughout the year. She is the ‘Deep Ancestress veiled by the passage of time… hidden in lichen-covered rocks and mountain peaks’. She is the Death Goddess, who lets die what is no longer needed, while finding the seeds to retain for the next season as keeper of the essential life-force.[3] As the shape-shifting Hag she symbolises that part of ourselves that possesses deep knowledge, understanding and reasoning, helping us towards our inner 'gnowings'. This is the wisdom She gives to us. She is a spiritual teacher and guide who has learned the value of being in creative solitude with the self. She appears as the dark moon, and is reminiscent of the Sheela-na-gig, holding her vulva wide open. She is often seen as an ugly old hag of course (originally meaning, ‘holy’), but her vulva was always seen as the original cauldron of souls – an embodied lacuna, and a liminal space in which to re-turn to the source for a rebirth.

Here she is on the quilt (thanks to friend Sheila for the printing). This is a timely post for Hallowe'en in the South Hemisphere, tonight being "between the Worlds", that name I have given to the quilt for Jan's Croning. But more on that soon. 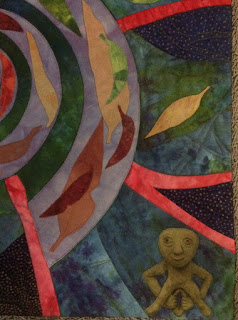 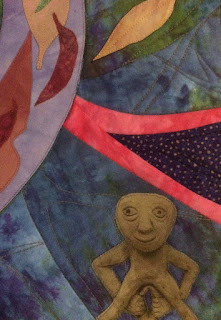 [2] Many of the ideas expressed here and below, in relation to Goddess imagery, come from Ffiona Morgan,1991, Daughters of the moon tarot. Daughters of the Moon: Forrestville, Ca.
[3] http://www.firetree.net/wheel/Brighid/cailleach.html


Posted by Annabelle Solomon at 2:46 AM