I still have several Bird-headed Snake Goddesses in my fabric store, as screen printed from a lovely linocut made by Sue Swanson, done what seems like eons ago! I remember a highlight of the trip to New York City in 2013 was seeing some of the small original, three-dimensional statues in glass cabinets at the Brooklyn Museum. These small clay images of powerful women with bird heads and snake bodies were plentiful along the Nile, and for me recall the deeply embedded association with nature people who lived along the banks felt with nature, nature that gave fertility of crops and animals and people; and nature that cleaned out the dross, consumed corpses and in some areas quite literally the dead of the community, cleaning off the bones for story in sacred shrines in households (as they did in the Neolithic city of Catal Huyuk, for example). They are also represented in other sculptured figures through Old Europe, as identified by Marija Gimbutas.
It is worthwhile recalling that in the world of symbolism the old ideas can remain and may be rediscovered today, in an age starting to review the basic premise of patriarchal ideas: domination through “power-over”. In doing so, we are attempting to restore the idea of “the great round”, non-linear jig-saw sharing of power and multidimensional, in which all things belong and fit, where ‘all parts relate reciprocally to all other parts’.[1] In an article from 2011, Miriam Robbins Dexter refers to this quest very well, so I’ll quote her in full:
In the twentieth-century we are attempting to extract, from prehistoric iconography and early historic myth, lessons which we can apply in order to construct a spiritual view which speaks to our time, a spirituality of wholeness similar to the spiritual system embraced by ancient women and men. Thus we look to ancient iconography for an integrating message.[2]

The figure of the Bird-headed Goddess with her uplifted arms take many forms and originated probably earlier than 4000BCE. The arms are always uplifted. Not only is the power evident, she connects the heavens with her bird head to the underground with her snake body, which regularly sheds its outer skin in order to give rebirth to the soul. As expression of the unity of all, maybe she is here now to remind us that the divine and the human are one in all of us. She was multifunctional as an integrated whole, presiding over wise counsel and justice as well as protecting the continuum that is our humanity in the giving and taking of life and its renewal.

It is difficult to decide top from bottom, when in fact the perspective is aerial: either from above looking down, as in hovering over the waters or looking skywards as though the quilt were hovering overhead. It takes an aerial viewpoint, whichever way you look at it – but by its nature will hang vertically on a wall. I have decided to solve this issue by having two possibilities for hanging the quilt and have created pockets along the shorter edges for a rod to go through to hang the quilt. And since the quilt is to be ‘reversible’, I will need another screen print of this powerful and beautiful anthropomorphic Bird-headed Snake Goddess for the other ‘mirror’ edge.
Next to come into view is the Sheela-na-gig. 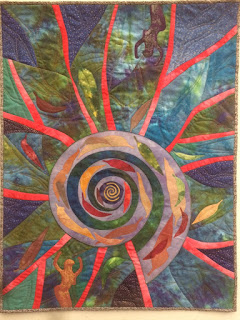 
Posted by Annabelle Solomon at 12:30 AM