More on the ‘economy’ of the gift 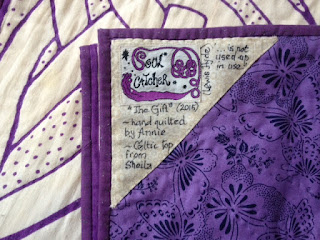 It reads “Soul catcher”, which I feel is epitomizes the elements of a gift exchange, where the soul or spirit of a community of people – here quilters – is recognized and flourishes in the ‘’moving”, the handing on of the object. My soul received nourishment in the receiving, as I believe did Annie’s in the stitching, and Sheila’s in the finding and seeing the value of the cloth.  Without art for its own sake, offered, received and moved on as a gift, the economy governing creativity can become at best artificial, or at worst, oppressive – which is the threat of a capitalist democracy’s unreserved reverence for ‘market triumphalism’ as Hyde calls it, (as though the market were a person). Certain values we hold important cannot be held by a market economy derived by the unregulated, exclusive and individual search for personal gain, without some things losing out. Things such as pure science, art and a spiritual life (unlike a ‘religious’ life), cannot be included in the economy unless by way of a gift; it is a contradiction in terms. And what is required to make sure these values remain active? The recognition of our indigenous spirit and the methods provoked and engendered over multiple generations for maintaining our communities and reciprocal values. There are different ways people do this. I do it through the recognition of the seasonal cycles of Earth as a means for informing and re-storying my indigenous consciousness.

While Hyde uses folk tales to demonstrate the power of the gift exchange to demonstrate the necessity of the arts and sciences as ends in themselves, recently the film “The woman in gold” did so for me. With a Klimt portrait as the central image, with its value to the community (of Austria) and the rightful ownership (by a Jewish family during WW2) being disputed – the artwork moved on. In the movement achieved the purpose of the artwork as a community 'be-longing': the value of the work as a market commodity was retrieved and distributed by the owner to many other community foundations. It is not uncommon for women who have made quilts to gift them to others. After the 2013 October fires in the Blue Mountains, in which over 200 homes were lost to the fires in only a matter of hours, mostly in the close vicinity to where I live. The result of a call for donations of quilts to help those who had lost all was unbelievably generous, with well over a thousand quilts being donated.
Posted by Annabelle Solomon at 1:24 AM