Going into the spiral

You would think it would be easy to come up with a piece for the backing, given my very large stash of fabrics, but making decisions is the difficult part. Feeling too uninspired to push through the process, I resort to procrastinating by tidying up and putting away fabrics left over from the previous quilt. Then I go with the flow and choose a very earthy-coloured hand-dyed cotton, one that will show up the distinctive quilting lines from the front, and also allow me to add extra to the back if the ideas germinating want to come to fruition. Having stabilised the completed background by adding the backing and batting and quilting through the three layers, I can now get on with creating the spiral as an independent piece.

Hearing the statement on a quiz show that “We live in the spiral galaxy of the Milky Way”, which then asks how many arms of the spiral there are, my instant response is two: one in and one out. Think the answer was more like nine – but that is in 3D in outer space! But it really does test one’s visual acumen to respond to something seemingly simple to represent. Jan has particularly asked that the spiral be “3D” – I assume meaning having a visual aspect that takes the eye both into and out of the formation.

I thought about using fabric paints directly onto a background fabric, meaning the spiral and background would be one piece. I tried this with a purple spiral painted onto hand-dyed cotton fabric, when I realized it would have to be stitched through on the outer edge to attach it to the larger background. Even with the machine, stitching through fabric paint is no an easy thing to do. The paint makes the fabric almost like plastic, so that the needle sticks. So back to the drawing board, meaning a return to considering fabrics for both the spiral and its background.

I discarded any ideas of silks or satins, in spite of feeling they would add texture and vibrancy. Though the finish might be nice, the technique by which they would be attached, (namely, raw edge applique) would make them unsuitable because of their tendencies to fray at the edges. At the moment there is a large hole at the centre of the quilt, which the spiral will sit over, but no background fabric. Here’s another challenge: choosing the background fabric to sit the spiral on, since they are not to be one piece. One light-bulb moment came with the thought of using a plain-coloured cotton homespun for the spiral, since I’ve been thinking about printing onto it, and a hand-dye for the background. Now that is sounding promising….but…not very exciting.

Finally the choice for the spiral colour comes by finding a small piece of hand-dyed leftover mauvish purple fabric. I had cut out the spiral from a hand drawn template, enlarged from my small A5 size drawing, to a bit larger than an A3. It wriggles around like a snake as I struggle to put it down to trace onto the paper-backing of the fusible material, wanting to make sure that the spiral will move in an anti-clockwise direction. As I make some moves in this direction, trying to make some progress, I am overcome with overwhelming tiredness, and meltdown occurs unexpectedly. I do manage to work out the direction to trace the spiral in reverse on the fusing material, but then all energy leaves me. At times like these, the spirit is willing…

The orientation of the spiral continued to raise concerns, by which I mean making decisions about which direction to position it on the background. I had thought to bring it in from the side, but arising from the lower edge gives the powerful appearance of a wave rising to its fullest before breaking, which is a nice concept for a croning quilt. Then the wave breaks on me: there is no top or bottom to this quilt. It presents an aerial view, looking down into the watery abyss. Now I can play around, work with the ‘bottom’ section, which needs ‘closure’, quite literally, in order to make the background one whole piece – albeit with a hole in the centre. 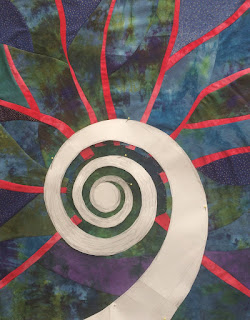 When I pay attention to my intuition, both design elements and how to implement them begin to move. When I push through, without due attention, earlier work often has to be undone – hand unpicked, and restructured. The flow of line is very important, as are the dimensions, and the positioning of elements on the background that I am creating. It can be unnerving to trust my intuition, because the fullness of the end design is not yet in sight, not there to follow. Although when you talk about lines and dimensions and positioning, there is nothing really totally logical, rational or linear about the process. It’s not like building the Parthenon, I know! The creative process is more about remaining aware and intuitive than having a plan of attack – though, it is possible that you may think that you have one.

It takes a bit of courage to acknowledge the influence and work from our intuition, because it is not one of the aspects of our human nature that is admired or nurtured. Yet it is a powerful force there in our psyche for us to call on and reconnect with – and though it can be a frightening, or off-putting experience rousing either anger or grave doubts, it is often to our advantage to take heed if that niggling feeling that something is not quite right in the creative process. It can be working too fast, an eagerness for some sort of movement, without any constructive self-criticism – or too much of the latter! On this occasion of intuition I decide to cut off the tale of the spiral (paper version shown here) so that it might emerge from one of the 'veins/branches' as the source of its power, with the effect to be seen in the next post. 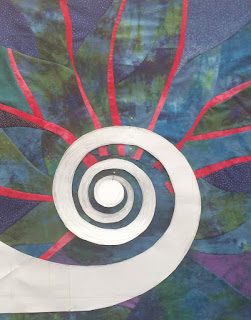 Posted by Annabelle Solomon at 10:26 PM