First thoughts that have been brewing are of the single spiral representing the return to self, and one’s inner life. Jan has told me that she had an image of a ‘downward spiral with a sense of treasure, which is hidden in the underground, deep wisdom and knowing…part of the work of the crone to bring into consciousness.’ The single spiral could be formed by cut-out gum leaves, using those lovely subtle colours of bush leaf litter found on the ground, and sit on a background that develops the concept of underground waters, which may be represented through a free-cutting technique as though looking into the depths.

Previously I had opened at a page in one of my visual diaries that has a small image in the centre of the page of a very sturdy upright tree trunk, where the viewer is looking upwards towards the spreading branches. I had extended the branches by sketching their lines out onto the page, and am thinking that the forking branches, extending as fractals outwards could also resemble the flow and partings of waterways – the underground waters of a Universal consciousness Jan has referred to. This could become the background fabric created on which to place the downward spiral…with the result that the gaze can be directed both down and upwards.

Though I don’t remember (and haven’t recorded) where the tree image came from. It is definitely connected to an indigenous way of being in the world, as expressed by Australia’s Indigenous Peoples, and the statement beneath it is worth noting. It has the title: Original Sovereigns philosophy.

It is interesting that for this round of creating a personal story quilt, the background is pushing forward as the starting point. Although the symbols are less figurative, more metaphorical: the underground waters of universal consciousness; transformation through fire; the hidden treasure of deep wisdom gained through life’s experiences. I have noticed how different my process is this time round, but one thing is consistent: there is going to be a large hole in the centre of the quilt that will need to be filled! Again, the central space is empty, as it was in the quilt made recently for friend, Robyn, where the space was being asked to hold Robyn’s life spirit, and challenged me to find the relationship between her symbols in that space. The space at the centre of Jan’s quilt is somehow different. It is smaller, coming about as a result of working with an aerial viewpoint. Here it holds the expectation of revealing the metaphor of a crone’s wisdom, the inward - and outward - looking spiral. 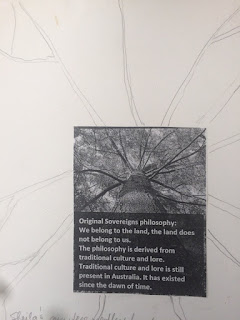 The fabrics:
After taking down my various boxes labeled satins, silks, home-dyed cottons, the dominant colours that catch my attention are the hand-dyed blue greens. I have also thought to include purples, and also looked at the stash of panne velvets. They might provide another soft, warm texture. The small pieces of star-studded blues are there from the last quilt and may be suitable to make small patches to create a ‘flow’ in the watery background. I have also pulled out a hand-dyed red to weave through the current, and enable the piecing of the ‘branches’ or ‘flow’, with the other fabrics interspersed. I remember reading that the branches of trees form fractals as they branch out. Red is the colour of the Mother, and represents the bloodlines of women that have kept families and tribes together over the millennia and aeons.

It means working in panels using the free-cutting technique, which I have marked out on my ‘template’, six in all, which enables the choice of fabrics as I go, starting with the darker hues at the top, although if I want to it can be inverted and the top become the bottom – maybe, depending on how the spiral fits in. Feeling quite nervous about how to start cutting into the lovely piece of hand dyed cotton. After taking the plunge with one of the shapes from the template, it starts to flow! I think it is the freedom of the cutting curves that gives me courage to continue. This is sort of weird, because you might think it more ‘freeing’ to have everything measured to join seamlessly, being enabled to join the pieces quickly and precisely as on an assembly line. No fun in that! Here is the first 'draft', with a few changes to come no doubt. 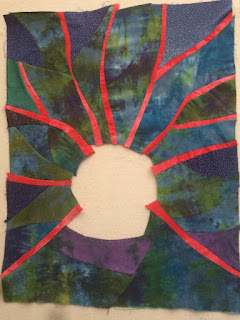 Posted by Annabelle Solomon at 11:07 PM