Layering the spiral with leaf litter

The idea of using gum leaves on the quilt returns
again. I love looking at the fallen gum leaves on the path as I walk the garden path that takes me up to the street…so many millions, yet so different each one. Those with bites out of the sides, tail/top ends cut off; some are brown, others pale beige, so many variations in colour, shape and size. Not all of the leaves are in perfect shape, as you can see, and some overlap to give the impression of layering. It seems appropriate to use these various shapes to swirl into and return out of the spiral shape. I think of the leaves as carrying our individual experiences, aspirations and realisations that have formed us in our becoming through our being in the world, at all points along the continuum, from the unconscious to the revelatory, all necessary parts of the whole. I had at first thought to write some thoughts as such on the leaves, then decided it is up to each person to decide on their own, as the journey of each is their own. 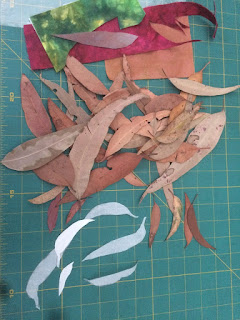 I pick out some of my hand-dyes that have been hacked into previously – pre-loved scraps. I love using leftovers from previous quilts, and this is the perfect opportunity. Using the raw edge applique approach, each leaf’s shape is attached with fusible webbing, then machine stitched very close to the inside border to make a secure attachment. Then the outside raw edge of the fabric is held together by ‘skirting’ around the external border, very close to the edge of the leaf. So, each leaf gets a double stitching. Perhaps I could have added a lot more on the spiral, but had to stop somewhere! I nevertheless got some satisfaction in stitching more leaves onto the background surface – leaves floating on top of the water, or on the tree branches, waiting to be taken down into the spiral for rebirth.

The spiral was of course connected with the idea of the journey into death and rebirth, of entering into the womb-tomb and returning by the same route. It is found on many Neolithic tombs and monuments (such as Newgrange), on pottery and shrines. The prehistoric spiral at centre of the descending spiral of the quilt is from a drawing by Judy Foster, which she says was part of the symbols forming a proto language, with many examples of spiral designs in a wide variety of geographic regions. It is also symbolic of the snake as representing the dynamic life-force coming from the regenerative powers of nature[1] I have printed a simple single spiral in gold, to suggest the treasure that lies within.
You will notice that the “tail” of the spiral has been cut off! It has become apparent that it needs to be seen to be arising from the waters, from the arteries and veins too, which has now presented me with the decision of which way to hang the quilt – a ‘which way is up’ question.


And the spiral has not yet been permanently attached for the practical reason that it is much easier to work with attaching the other leaves and symbols without it in place, and I can play around with placing it into position. 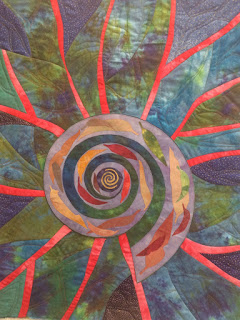 Posted by Annabelle Solomon at 10:55 PM