There are many circles, semi or part circles used in the quilting process. The decision to find ways to trace out encompassing circles has been deliberate. The circle encloses a safe, non-hierarchical place, a sacred space in which all have equal rights to be heard, as well as a responsibility to listen to others. It can be formed to reminds us of its qualities by people or by stones arranged in a circle that hold the people in its scared space, who are bound together by the principle of equality and equity. It is also represented by the orobouros, the serpent of renewal holding its own tail in its mouth, and is seen in many natural phenomena, such as the full moon and the curve of the horizon. In its broadest, the symbolism of the circle encompasses the Cosmos, with an unbroken circumference that is nowhere and everywhere… the “big bang” of Creation that is happening here and now, as the lovely astronomer Brian Cox reminds us so eloquently.

As can be seen the first design did a total transformation from a free-form into a frame, well contained by strong black and white border, which seems to demand attention! I feel that it has fulfilled my initial expectation for the quilt being colourful, vibrant, and perhaps even demanding – perhaps qualities that Rob stands for in her life, always has, which makes her so powerful a woman and so precious a friend. I know this applies to many of those she has embraced in life, and I didn’t forget that one her important spiritual (and social) practices in the circle dance in her community.

In the quilting of the moon phases, the circles overlap, eventually to form another vesica piscis at the heart of the rose moon. The dove Goddess has Her halo of aura, and the heart-dove is encircled by a crescent circle that opens out into a full circle. There is no “power-over”, no hierarchy to be seen here. Only power with. 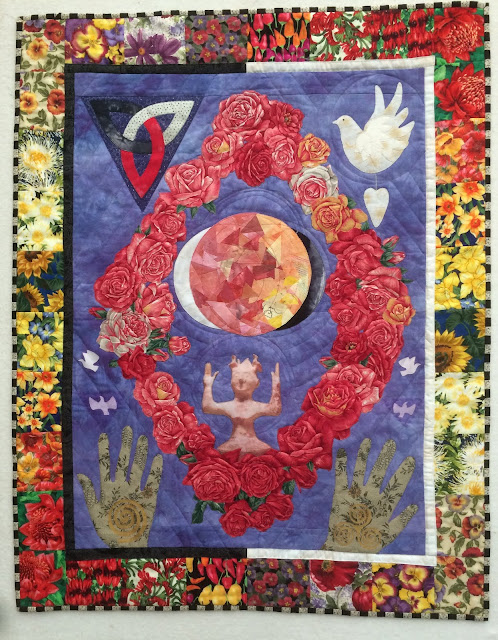 Coming up with the title
This is usually the last stage in the process of creating, though more often than not ideas for the naming of a personal story quilt pop up during the construction. But that didn’t happen this time, probably because I was constantly struggling with the structure and the placing of images, and also my own ongoing health issues. We get our original names from our parents, but naming is an ongoing process, and sometimes people diminutize or actually change their names as they get to know themselves better or and their friends adjust their names – hopefully with fun and affectuib as the intention.

Then, just in recent weeks, as the quilt seemed to be edging towards a satisfactory conclusion, a meme posted on a Facebook page resonated with me: “hardcore soulful living”…seemed appropriate for Rob’s life. Though I was not sure about the qualifier ‘hardcore’, I thought “soulful living” seemed to fully express Rob’s 'life-style' – to use that word out of the usual context of glossy magazines. Nevertheless, all the descriptors of hardcore seem to apply by virtue of their both positive and negative strengths, and I included them on the dedication label on the back of Rob’s quilt. Here are a few, with the final fanfare: “You got it!”

You soared, you crawled, you laughed, you cried,
You stuttered, you roared, you stumbled, you ran,
You danced, you overcame. You softened, you powered up.
You braved it. You kept on.
You felt. You felt it all.
The true definition of hardcore, soulful living.
You got it! 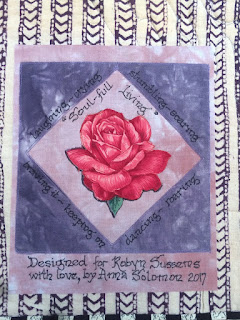 Some references (others are in footnotes):
Thomas Cahill, 1995, How the Irish saved civilization: the untold story of Ireland’s heroic role from the fall of the Rome to the rise of medieval Europe, Hodder and Stoughton: London
Claire French, 2001, The Celtic Goddess: Great queen of demon witch? Bell & Bain: Glasgow
Jean Markale, 1993ed, The Celts: Uncovering the mythic and historic origins of Western culture, Inner Traditions: Vermont
Iona Miller, 2016, Ancestors and archetypes, http://ancestorsandarchetypes.weebly.com/dove-goddess.html
Candace Pert, 1999ed., Molecules of emotion: why you feel the way you do, Simon & Schuster: UK
Barbara Walker, 1988, The woman’s dictionary of symbols and sacred objects, Harper & Row: San Francisco
Barbara Walker, 1983, The woman’s Encyclopedia of myths and secrets, HarperSanFrancisco

Posted by Annabelle Solomon at 11:03 PM