This is the first of several posts to follow that describe the process of creating Robyn's personal story quilt from the elements in her life that she mentioned for the commission, and from our more than thirty years of friendship. It took longer than expected to come into its final form, which, as you will see is very different from the early inceptions. Many interpretations of the various symbols follow each section, and are according to the research I have done in order to represent them in the quilt, made especially for Robyn, with much love and admiration for a woman who has lived soulfully.

First design
With ideas starting to gestate about how to represent her special symbols of the chakras, the vesica piscis (sacred yoni), the white dove of Iona and the Celtic interlaced triangle - set within the context of communion with others in her life, love of community and her very personal spiritual journey - the background needed to be visualised.  The symbols are seeded in form quite easily, the most basic and essential of which is the full moon. Placement, as usual will come later. First the background needs to become manifest.

In thinking about the first draft for the background, the chakras made visible through the colours of a rainbow was my starting point, since of course, the colours are the same. The seven Chakras and rainbow colours would encircle a full moon in such a way as to blend out from the full dark on the other side of the moon. Excitedly I searched through my stash of hand-dyed cottons for colours that might work for the rainbow hues, none of which seemed to sit nicely beside each other. And then it occurred to me the colours of the rainbow-Chakra could be done while including Rob’s desire to represent her love of flowers. I started by pulling out a very large collection of all my ‘flower power’ fabrics stored in one of my many plastic tubs. Rob had given me free rein on how to represent the essential elements in her personal story, but we had made one agreement: that I would not buy any new fabrics for her quilt - an agreement I stuck to.

Feeling slightly overwhelmed by the variety and colour of the fabrics in my flower power selection, I had made many attempts to represent the seven colours in ascending order, as they are normally viewed in relation to the body’s control points along the spinal column - starting with red at the base and working through orange (pelvis), yellow (sacral region) green (heart), blue (throat), purple for the third eye in the centre of the forehead, and violet vermillion for the top of the head, representing the unity of emotions, body and soul. Suddenly, I realised that flowers often contain several of the desired colours in one, which led to the next design decision - to cut the chosen fabrics into 8 inch squares! In this way I thought, I could still represent the colours as ascending from the bottom, interspersed with the sky fabrics that I’d wanted to include as part of the background. Again, not to be!

As I sorted through for the colours appropriate to the Chakras, thinking they might end up looking like a large bed of flowers rather than the rigid stripes of the rainbow, it provided a chance for an overlapping and an intermingling of the hues. I thought I had better warn Rob that she might be getting a pretty bright and flamboyant quilt! Little did I know then, but this first design was to go underground, and slowly re-emerge in a totally different, but no less flamboyantly colourful form.

By serendipity, during this excursion into the flower patch, I had also uncovered a large piece of fabric with very natural images of rose flowers - another request from Robyn for inclusion in the quilt. This gave me something to work with! I backed the fabric with fusible webbing and, with great satisfaction, I started cutting each rose out individually while resting my leg in a horizontal position after a serious bout of cellulitis that had recently landed me in hospital receiving intravenous antibiotics. Not knowing when to finish, I just kept going until there were more than thirty or more roses in various stages of growth  and colours, ready to be assembled in the centre of the quilt - when and how was not yet apparent! 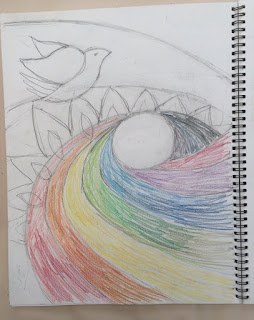 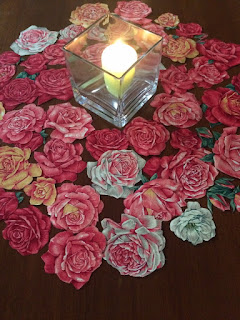 Posted by Annabelle Solomon at 7:39 PM