The frame becomes manifest
After month upon month of little productive creative activity, I was feeling frustrated by the many false starts, and tired of waiting for inspiration. The many attempts to bring the background into satisfactory visible form seemed futile. So, I decided to act in a rather ruthless fashion for me. I made a promise to myself: to start and finish something in the one sitting! I had cut the chosen floral fabrics into 8-inch squares as described previously. Next I decided, quite impetuously, to cut the squares into 4-inch rectangles. By joining them together along the long side I was able to cut through the middle again and create a border four inches wide, each the same. With the second half I could complete a border-frame with the chakra colours in descending order, thus completing the cycle. After all, the chakras are hardly independent of each other, nor have any distinct hierarchy the way I see it! There it was: a floral frame for Rob’s quilt! I had both started and finished it in one sitting! Of course, it had to remain in four pieces until it could be attached to the central panel, the heart of the quilt, which would display Rob’s requested motifs: the Celtic knot, the Ionian dove, the vesica piscis – and, all the roses I’d cut out in preparation. The moon would be there too.  Finally I felt more confident, now that the colours of the chakras had been represented.

Significance of the Chakra: colours of the rainbow
The significances of the meridian points on the body known as the ‘chakras’ goes back countless millennia, crossing many geographical areas, showing up as religious and spiritual signifiers in many different cultural contexts. In that way it is universal – and why wouldn’t those colours be for anyone looking at the natural phenomenon of a rainbow found everywhere on Earth? It separates white light, the stuff we don't tend to see, because ‘that’s just how it is’, into the spectrum of multiple colliding colours, revealing the full glory of white light and at the same time, its hidden dimension. For scientist, Candace Pert the rainbow is about both hope and truth, reminding us  ‘to pierce through the layers of everyday reality and penetrate to the truth’ (p118). She was referring in particular to the domain of scientific discovery of course, but that’s not the only way to view her comment.

After checking the significance of the chakra in Barbara Walker’s two tomes, reference to the chakras appears under many different entries.[1] Everyone is familiar with the Tantric meditation of the ascending stages of wisdom represented by the snake goddess Kundalini uncoiling herself from the base of the spine towards the crown of the head. This meditation is done by visualizing the intertwining of an ascending double helix (of the DNA?), which unites one thread representing the moon with the other representing the sun. Candace Pert, using impeccable scientific techniques identified these bundles of receptors and associated peptides residing along either side of the spinal column. She was perhaps among the first to show that the chakra points, the centres of “subtle energy” that influence the body’s function on all levels, physical and metaphysical, identified thousands of years ago in Eastern holistic health practices, aligned with this ancient version of understanding body-mind integrated functions.[2]

Rather then enjoying these subtle energies in a motion of ascent, the circular motion of group interaction in coming together to deeper understanding is the one that appeals to me (and it appears to be more accurate physiologically). In the circle there is no beginning and no end. Walker refers also to Sufi practice (‘halka’ in Arabic) and a ‘magic circle whose members cooperated in the effort of comprehension’(p.160). And of course it is evident in the practice of traditional circle dances central to so many cultures, and which I know to be part of Robyn’s spiritual practice.
Flowers around the border frame, representing the chakras:
Red colours are represented by the chillies (I know, not flowers, but red hot!), warratahs, kangaroo paw, and Sturt dessert pea. The reds then meld into the orange and yellows of poppies and daffodils, intermingling with sunflowers and the pale yellow flower of the Tasmanian Blue Gum. The various blues and greens of foliage surround them, and finally, the purples and mauves are blended in the patches of pansies and primroses to represent the sixth and seventh chakras. 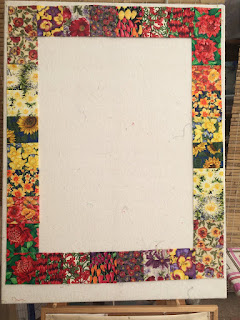 Other breakdowns of the significance of the chakras can be found in many online sites. This is what I have gleaned from several, (which I haven’t referenced because I made a sort of composite, as it felt right for me):
At the root is red, which represents groundedness through connection to Earth as Mother Gaia. Orange is about pleasure and the sex organs, represented by the Middle Eastern Goddess, Anat. Another Goddess from the Middle East, Tanit, sits at the juncture of our claiming our personal power, the yellow representing the solar plexus. Green for the heart chakra is of course the fecund power of love, as represented by the mother Goddess, Isis. While another Egyptian Goddess, Neith, as the blue centre of the throat, is the speaker of truth. At the centre of the forehead is the third eye, represented by the purple for our intuitive psyche, our soul, and at the crown is the reason for all the others: being in community!