During her time of retreat in Iona, Rob told me that sitting on the window ledge in her little attic room that overlooked the bay of Mull, there was a Columba (dove). There are several representations of doves in the quilt: the dove at the top right hand corner carries a heart. The first drawing of the dove concerned me a little, thinking it resonated too much with the ‘Twitter” symbol, but on second thoughts that didn’t seem to be such a bad thing, since doves have long been connected with communicating and making connections. I also know that the first sketch is just that, and will continue to morph during the process as more ideas and connections are made.

By serendipity, at the ready I had a photocopied image printed on fabric (thanks to Sheila for printing them). It was one of the Goddesses that had appeared in the previous quilt of thea Gaia’s “Swinging Bridges”, a presentation of ancient images of women. It is usual that something from the previous quilt makes a demand to be included in the following quilt.  And, here She was: a small Goddess statue from ancient Crete wearing a dove crown.[1] Apart from resonating with Rob’s Ionian dove, I instantly knew that Her place was at the base of the mandorla of roses. There was no hesitation in this decision. It had been lovely placing the roses, and attaching them to the jacaranda background, and it felt very comforting to have the Dove Goddess ‘at home’ in the garland, holding the future of the quilt in place with her upraised arms. I read somewhere that upraised arms (and possibly by extension, wings) have long been the indication of worship in our human story. 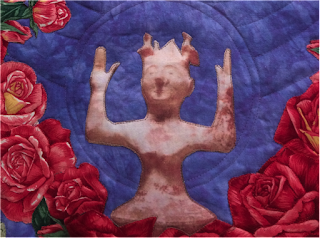 The Dove Goddess sends out more doves from her hands to all corners. The four small doves rising from the hands at the bottom of the quilt came into place as a last minute addition. They are placed radiating outwards towards to the four corners. The small doves fly skyward, or to the four corners of the Earth maybe carrying messages of hope and love as does the heart-carrying dove, or giving back into the future with equal measure?

Symbol of the dove
The symbol of dove goes back a long way as indicating the spirit of a divine presence among us – by which I understand, something yet to be known fully about within ourselves, not something that it exists outside ourselves. The dove, or pigeon was the first domesticated bird, and was believed to be a messenger, a go-between for communicating with divinity (the divine in ourselves), destiny with a strong association with wishful prayer for taking charge of our destiny – communications occurring on many levels. The description of this little Cretan representation of Goddess assigned to her by Swinging Bridges goes: “She flies to the centre of being and connects with the infinite within.” In the image it can be seen that doves fly out from Her hands - so she also gives back what she has found within.

On the quilt, the four small doves had me in a conundrum as to the practical means to ensure they would not flying off’, since they are attached with an adhesive medium that needs stitching down to keep it in place, the medium all the symbols have been worked with.[2] Initially I felt reluctant to cover them with netting because of negative connotation of binding or entrapment, but did so with two of the little doves when I remembered from earlier research the net is a symbol of order, of weaving in order to keep the order of the Universe and the unfolding of human lives by weaving together the dark and the light. Knots and the nets they form are very important in this process. This interweaving is what Simone DeBeauvoir has succinctly described as the “unresolveable, ambiguous drama of freedom and contingency”… a condition weaving pleasure and pain, health and disease, life and death.[3] The other two small doves have been hand-stitched into place. In the original card, the doves eventually shapeshift into the labrys, the double-headed axe of justice held sacred in ancient Crete.

Doves were associated with oracular divination, often in the context of romantic relationships and fertility. The power for creation by women, represented by Canaanite, Sumerian and Israelite and Mediterranean Mother Goddesses known by various names in various locations as Ishtar, Inanna, Asherah, Tanit, Shekinah, Astarte, Anat and Aphrodite, was symbolically envisioned as the dove, with many of her dove symbols adorning images, temples and shrines. We now also recognise the dove as a peace symbol – a state of being so important to find within and among ourselves.

Many other Goddess images from antiquity have wings. I’m thinking particularly of Isis, who shelters all and sheltered her beloved son, Horus, beneath her wings (a myth that later morphed into the Mary and Jesus story). In Hebrew the word for ‘spirit’ is in the feminine form (‘ruarch’), and Goddess embodiment in the religion is known as Shekinah, Queen of Wisdom. Many aspects of these earlier ancient stories have been incorporated into Christian symbolism as the symbol of the dove: for the immaculate conception of the godhead by mother Mary; and the dove hovering over the head of Jesus at his baptism, for example.[4]
I have also read that there are images of a dove being re-born from the mouth of a dolphin, later transposed into the story of Jonah being ‘born’ from a whale, his name meaning dove in Hebrew. ‘Ionah’ is a cognate of the Sanskrit word ‘yoni’, which later became known in Latin as the ‘vesica piscis’. The root form ‘io’ has connotations with and means ‘moon’ in the Egyptian lexicon, providing yet another connection to the monthly blood ritual that is the basis of continuing human life.[5] The yoni of course represents the female pubic area (often referred to as a woman’s ‘sexuality’), but it is much more importantly the sacred site in a woman’s body, through which life is endlessly renewed, symbolizing the faith, hope, joy and love that is at the heart of the lived human experience.[6]

Needless to say there are too many historical and cultural associations to explore here. What is important here is Rob’s association through the time she spent in retreat on the Island of Iona, the abbey of St Columba – whose name means dove in Latin. It is difficult to be certain about the reason this person received his name, and how the symbol of the white dove relates to him (apart from his name). Maybe because he brokered a peace with the story of Jesus among the feuding barbarian tribes of the place the Romans called Hibernia and had long wanted to conquer, by building on existing pagan rites and symbols – a common approach to the process of colonising, even today. Since his name Colum-cille (kille) means ‘Dove of the Church’, it may be another appropriation of women’s reproductive power for renewing life to fertilize a spiritual renewal in pagan lands, though the symbol is normally attributed (perhaps in hindsight) as being a messenger of the Christian God of peace to a violent environment. 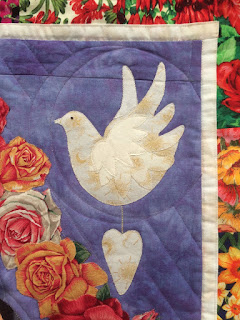 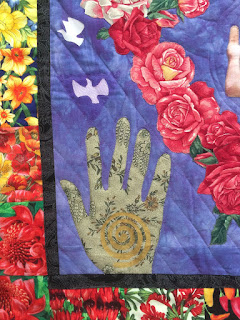 [1] She can be seen in my PhD thesis on page 154, and is taken from the Awesome power series, 1989, published by Swinging Bridges Visuals, Australia, produced by Rosanne DeBats & thea Rainbow/Gaia.
[2] It is with thanks to Kerry Beaumont that the rose mandorla has been given more detail through stitching into them using the free machining technique.

[3] http://www.encyclopedia.com/environment/encyclopedias-almanacs-transcripts-and-maps/webs-and-nets. Shared by many cultures in different ways through their stories, the weaving of warp and woof into net and fabric seems to have the common thread of fate and destiny.
[4] Iona Miller, 2016, Ancestors and archetypes, http://ancestorsandarchetypes.weebly.com/dove-goddess.html
[5] Barbara Walker, 1988, The woman’s dictionary of symbols and sacred objects, Harper & Row: San Francisco. For me personally at the moment ‘IO’ stands for ‘immuno-oncology’, which has been my treatment for advanced melanoma over the last 9 months.
[6] Barbara Walker, 1983, The woman’s Encyclopedia of myths and secrets, HarperSanFrancisco
Posted by Annabelle Solomon at 6:59 PM