Installment #6: the phases of the moon

Rob’s quilt is a celebration of the fullness of her life as woman, daughter, lover, mother, sister, and all her relationships, so the full moon sits at the centre of a ‘mandorla’, almond shaped celebratory garland of roses, suggesting recognition, celebration and honour (‘hacol hakavod’, as it is expressed in Hebrew). Returning to my usual method for creating the face of a full moon, I applied lots of small (pubic) triangles cut from various shades and types of whites from my stash. I overlap them in an attempt to emulate the shining glow of a gleaning, white full moon. Then it occurred to me that a representation of the seasonal cycle of change was not particularly obvious in the quilt – though later I was to make reference to this by attaching the frame to the purple background of an equal black and white surrounding border: summer/winter and day/night. I discarded this first full moon (- it will no doubt be used in a later quilt), and set to work on another, inspired by an image of the full ‘strawberry moon’ seen during the summer Solstice, and posted on Face Book – again providing an interesting source of inspiration!

The full moon, waxing and waning
It is interesting that the full moon as a ‘rose’ moon a-rose for the quilt! It appears in the same month of the Summer Solstice. The Indigenous Peoples of North America name it a “strawberry moon”, since it coincides with the harvesting of strawberries in the month of full summer, June in the northern hemisphere. Delicious strawberries surely remind us of the fullness of the seasonal cycle, from rebirth at Winter Solstice, reaching full expression in earth’s fruitful harvest at the Summer Solstice, (which is for us in Australia is in December). Apparently the indigenous peoples of the Americas have names for each of the full moons as they relate to the annual cyclical earthly food production and availability. This rose moon has an Australian inference.

The presentation of the full golden strawberry/rose moon in the quilt shows it triumphant, in partnership with the white crescent new and waxing moon,which heralds a coming into fullness; and an ‘old’, waning moon. Though we don’t actually get to see the full dark moon over the last three days of waning part of the cycle as black (as the moon waxes form the left across to the right in the Southern Hemisphere, so does it wane in that direction with diminishing light after fullness. These phases are of course also redolent of the three phases of woman: maidenhood in readiness, mothering in nurturing, and croning by reminding us the cycle will continue. 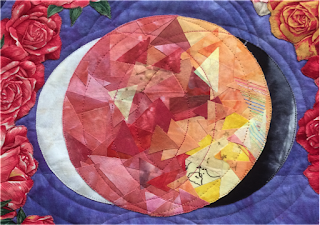 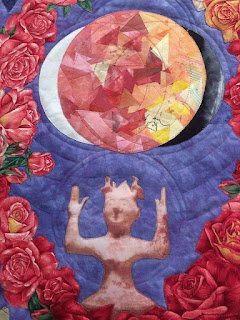 Below is how the four corners of the "Earth" as represented here in Rob's quilt and according to her story have come together, and how they sit within the frame that insisted on coming first! 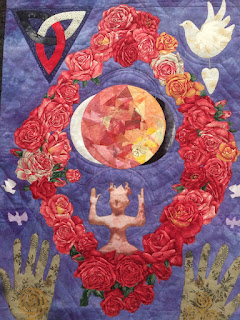 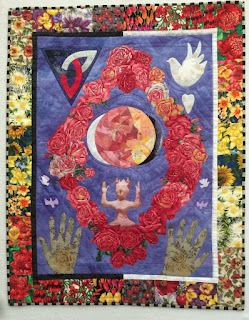 Posted by Annabelle Solomon at 10:12 PM