When the nine block ‘shrines’ had become manifest, the question of how to fit them together showed up as the next challenge – the challenging part of the creative cycle of forming, then ripening the fruit for a joyful summer consumption. And this is where the town plan of Catal Huyuk uncovered by archaeologists came into play: a Neolithic town in which each dwelling had an irregular, rectangular shape, with shared walls. At last the structure was becoming clear. I started to think the shrines could be cut jig-saw-fashion to ‘fit’ together, and joined by a strip of fabric, rather than pieced together to form a closed seam, which would make the whole piece too bulky.

It seemed to want to grow organically, and could not be thought through ahead of time since the individual shrines had taken slightly different, uneven rectangular shapes. Then it became unavoidably obvious that the choice of cloth to form the adjoining ‘walls’ had to be red in colour, an obvious reference to women’s life-giving bloods – and in fact, the colour dominating many of the murals and shrines found in the complex at Catal Huyuk. This work was definitely a ‘process’, a work in progress by trying to get each block to hang together, shrine-by-shrine, while trusting that somehow the ‘township’ of shrines would come together. It was not possible be too cerebral about placing the images – according to date, or importance, or geographical connection. ‘It’s a shame,’ I had thought to myself, ‘but that just won’t work materially.’ A feeling of relief had come over me, but also of danger: what if I can’t make them sit nicely together as a whole?

Raw-edged appliqué was the obvious choice using these materials, including of course lots of vliesofix, that fabulous stuff that glues fabric pieces together through a process of attaching through ironing then removing the backing paper. I did have two irons: one for ‘clean’ ironing, and one for use with this sticky adhesive. Nice idea, which doesn’t work so well when the brain works faster than changing irons, and both irons got quite dirty, but thanks to the silicon ironing sheet, control could be maintained! The raw edges of the tapa cloth came together with a strip of hand-dyed red fabrics from different sources, freely cut, adhered, and then stitched close to the edge of the red. I spent a lot of time changing bobbin and top threads as I worked through the process of joining the shrines. The irony was that, in the process I needed to keep a ‘straight’ eye while recognising the result would not give straight lines – a difficult process for me, who prides herself on having a very straight eye, to within a millimeter – or less! Below is the final form it took, taken in exhibition currently at Braemar Gallery as part of the "Out of Context" exhibition (6-30 April, 2017). As if obvious, there are not many straight lines here! 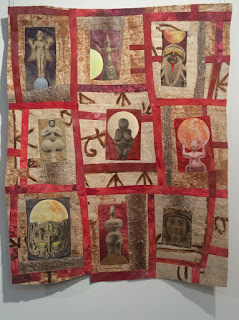 Posted by Annabelle Solomon at 1:38 AM