Reflections on the ancient images of woman

The images represented on the quilt range across millennia, with archaeological dating arising in the Paleolithic with the figurine of the Venus of Willendorf, the early to late Neolithic and Bronze Ages, going through to the painted image of Kali from twentieth century India. Thea Gaia’s passionate, life-long study made her a foremost scholar of women’s genealogy across all ages in all its dimensions. In tracking the meaning of the Snake Goddess of the Neolithic civilization of Crete I came across a monograph on my library shelves, by Dorothy Cameron and given me by thea in 1998, entitled “Symbols of Birth and Death in the Neolithic Era”.[1] Though prehistoric by definition, meaning there was no decipherable abstract written text, these early Neolithic cultures were not devoid of symbolism by any means. And though written in 1981, the analysis presented by the author of a matrifocal, matrilineal society venerating the female principle and describing ways in which the value given to womankind was demonstrated remains uncontested, and to my mind uncontestable. She embodied a powerful link with the forces of nature through her fertile creativity, and in her chthonic aspect, for intergenerational and seasonal rebirth.

Though dated around 1600 BCE in archaeological terms, the figurine of the Snake Goddess is a link to Catal Huyuk, and is evidence of the long prior period of women’s ruling powers. It is thought that the population from the earlier Anatolian city had established roots in Crete (many hundreds of years before King Minos, from whom the descriptor minoan derives, appeared on the scene). James Mellaart made the case for the precedence of woman over male in social customs and religious rituals due to the life-giving fertility attributes of the Magna Mater. The funerary practices of burying the skeletons beneath the beds in the houses show the woman’s bed to be larger, more adorned, and treated with red ochre, an indication of a shrine-like structure and something only accorded to the women. I find it fascinating that Cameron reports that in the villages surrounding Catal Huyuk today women still dip their hands in red paint ‘…and paint a row of hands across their walls, which look exactly the same as those found on the shrines inhabited 8000 years ago’.[2]

The red borders around my shrines have taken on added meaning, and it makes me think I might revisit the back of my quilt with red hands dipped in red paint. Since I could not piece the Goddess shrine blocks together with a closed seam, the back of the quilt was still rough and ready, with gaps and raw edges – another challenge of how to deal with it! Time was closing in; the gaps needed closing over. I went back to my initial plan, to do what comes to mind in the moment, so the vliesofix came out again, and strips applied to cover the cracks in the back of the quilt. I knew they couldn’t be stitched on, since the stitches would show through onto the front…another compromise had to be reached. More glue on fabric, to be ironed on to cover the joins! Now ready for hanging. 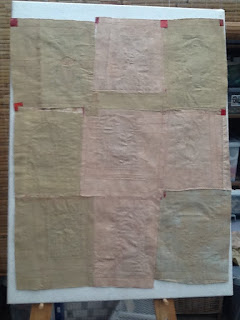 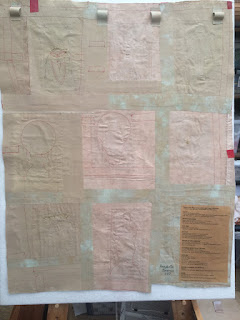 Returning to my books to review and renew my understandings of these ancient images of woman-as-Goddess, a sense of the exuberance of the season of life bouncing back after a long winter at Beltane arises. I wish these figures were more widely known and revered in so many societies around the world that have belittled woman’s power for creativity and enduring nurturance. It is the figurine of the Snake Goddess that brings me to consider another aspect of the materials used in the quilt: the snakeskin adorning each of my little shrines. In the image on my quilt, she holds snakes in her hands, here stitched in with a silver thread. Other figurines have been found with snakes twined up their arms, on the front apron and around headdresses (– and of course there is the Medusa, with hair of snakes, but more of her later). The women wore tiered, graduated skirts to the ankles, with a tight bodice and waistband to support their breasts, and were considered to be active in every aspect of society alongside men, including the art of bull vaulting shown in the frescoes on the walls of Knossos. 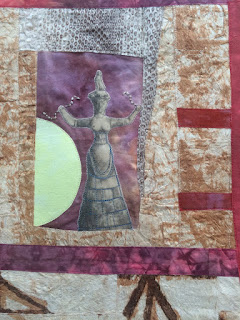 Posted by Annabelle Solomon at 5:48 AM