Although it could be said that quilts usually start with a grid in mind that was not the case here. Here, the cards created by thea Gaia were the starting point, and how to form a ‘grid’ while embedding them in the tapa cloth was elusive. Grid formations that have presented themselves over the years returned from memory to consciousness. I have loved collecting images of stone walls, crazy paths, even tiled toilet floors (including one of thea’s)… weird maybe, but definitely providing arrangements of dimensions that could be used and adapted in the structuring of blocks for a quilt. Another structuring possibility came back to me, learned from the treasure trove of thea’s knowledge about Goddess and women-focused societies of yore: the overview of the town plan of Catal Huyuk, a Neolithic city of approximately 7,000 BCE.  It is in Anatolia, Turkey, and since discovery in the mid twentieth century has been of great interest to archaeologists, who found many small figurines of, and shrines to obviously important women, clearly venerating women’s ability to renew life. It led James Mellaart in the 1960s to propose the possibility of a peaceful matriarchal culture, one built on cooperation and egalitarian communal sharing, indicating a non-hierarchical community focusing on the ‘female metaphysical principle’.[1]

The Turkish authorities were not impressed with this interpretation and the site was shut down for many years, but has since re-opened in 1996. It seems that the story presented by Ian Hodder from Stanford University, which was initially acceptable to the authorities as it was based on a patriarchal interpretation of the archaeological finds, has been reconsidered in light of having unearthed an 8000 year-old goddess, further evidence of a matrifocal culture. And the excavation – and no doubt the debate - continues.[2] 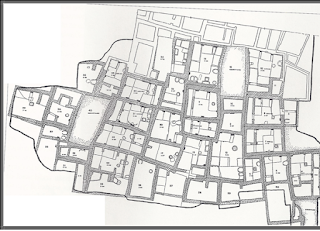 The season of the developing fruits and the possibility of their ripening, ready for the forthcoming harvest, is coming to the fore now: the “shrine” notion was starting to bubble up, shrines of remembrance to these divine women…and a visual tribute to my long-time mentor and friend, thea (Rainbow) Gaia. I started by attaching vliesofix to the back of the tapa sheets, and roughly cut blocks large enough to ‘enshrine’ the images. The tapa has the appearance of rough-hewn desert stone, but trouble was in deciding just how to go about getting the right aperture to show the attributes of the goddess images at their most powerful. Should I cut up the base cloth into random rectangular shapes, match them up with an image, and then decide how much of a ‘window’ to cut out, and how much of the figure to reveal? Or should I cut image by image, deliberately and, with greater precision of placement over the image, cut away the window to reveal the image. Then there was the shape of the aperture: a precise square or rectangular cutout, or something less formal? Coming back to the shrine idea, it seemed best that they should be roughly square or rectangular. Having cut the background away from some of the smaller figurine prints, they needed to be attached to a background piece of a different colour – still earthly, but it could work to bring in some contrast to the basic beige of the tapa cloth. This is a point at which to start, with the construction of each individual shrine for each of the Goddess images. At the beginning, feeling the pressure of both time and recovery from illness, I had made an agreement with myself that, not having any vision for the final form, I would just go ahead with constructing each block, without my usual self-critical eye.
[1] Judy Foster, with Marlene Derlet, 2013, Invisible women of prehistory: three million years of peace, six thousand years of war, North Melbourne: Spinifex Press.
[2] http://news.stanford.edu/2016/09/29/archaeologists-find-8000-year-old-goddess-figurine-central-turkey/ There is much more to the story of Catal Huyuk than can be recounted in my short post.

Posted by Annabelle Solomon at 12:08 AM