Tribute to thea Gaia: 'Before the beginning, when God was a woman'

This is the first of 4 or 5 blog posts about a quilt inspired by the life and work of thea Gaia, who was my friend and mentor in coming to understand that I have power as woman, and the means for re-claiming that power.
Part 1: beginning

The invitation to again be part of the group exhibition of Blue Mountains textile artists in 2017 was exciting. I had been gathering basic ideas about a Goddess series quilt, based on the 9 images of ancient women produced in a project of dear friend and mentor, thea Gaia who had died in 2016. This series had been included in my thesis as part of the correspondences for the Creative Wheel of the Year.[1] In spite of my initial enthusiasm I tried to opt out of the exhibition, because even though the images of ‘women of power’ were there, available to work with in concrete form through the cards that thea had produced, its form remained dormant, buried in the dark recesses. I was not finding the motivation, energy or creative input to bring the raw materials together. I was feeling the influence of the season of Samhain – or Hallowe’en as it is know in general parlance.

There were several reasons for this lethargy, which is why I suspect the tangible manifestation of ideas remained ethereal, elusive and intangible. Firstly, an acute attack of cellulitis took hold in mid-January, which had me hospitalised receiving antibiotics intravenously for 4 days, with the discomfort lasting for many more weeks. The experience of being dependent on others in the hospital was soul destroying. And of course the whole melanoma thing came crashing down again: that here I was, still at the effect of the first malignant melanoma removed when I was 25. Excised at that time also were the lymph nodes in my right groin, leaving me with a lasting and permanent lymphoedema of the right leg and foot. Not a good space to be in when trying to encourage the creative juices to flow. But slowly, they did start to flow thanks to the curator’s encouragement, just as the warmth of the Sun starts to return to renew life beginning at the Winter Solstice. 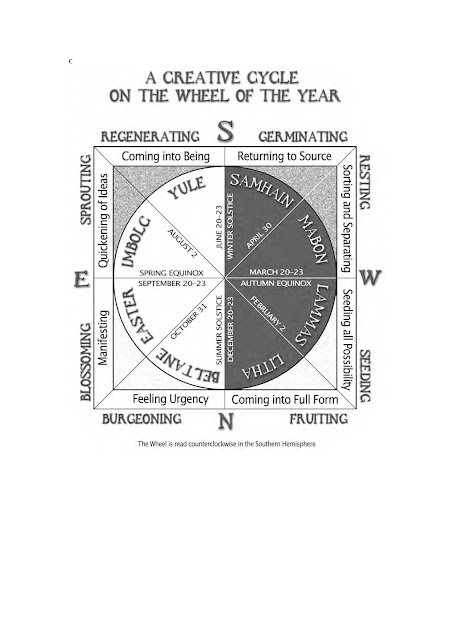 Posted by Annabelle Solomon at 3:05 AM