more about the goddesses

Another figurine on the quilt that can be associated to the culture of Catal Huyuk and Minoan Crete is the Cycladic Goddess, found on the eponymous neighbouring islands. Interestingly, here she is seen in a more stylized form than the Snake Goddess just mentioned. Small-breasted and folding her arms across her breast, with tapered legs and without clearly defined facial features, she somehow reminds me of the small 25,000 year-old woman dubbed the Venus of Willendorf, again for where she was originally found by archaeologists – but for me she is the Great Mother, and in my correspondences she represents the  creative fecundity formed in the darkest period of the year, which gives birth to the light at the winter solstice, transforming and renewing. In this cycle the Cycladic Goddess furthers the process of renewal at spring, when the unformed potential held in the dark becomes manifest in promising buds and blooms. 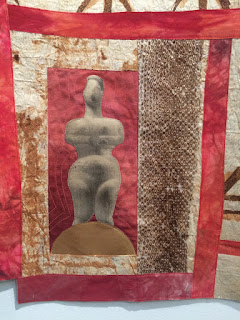 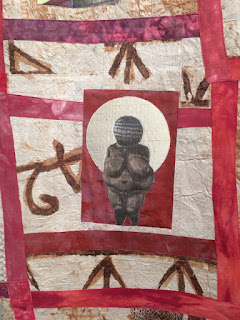 Another image is that of the Bronze Age goddess known variously across the ancient territories of Mesopotamia, Sumeria and Babylonia as Inanna – or Ishtar in later texts. She expresses the joy resulting from the fecundity of creation, and in the creative process brings the promised end of renewal into full form, seasonally experienced in the harvests of summer. Also slightly stylized perhaps, the image shows the abundance of woman-power for nurturing and sustaining as she hold her breasts in offering – and maybe celebrations? Where would the human race be without her? Her perceived role goes back to the Neolithic idea that the ‘creativity of the goddess was a constant state, brought about by herself in union with herself, and that the fertility of all aspects of creation was her epiphany.’[1] Stories about this deity in her various names, forms and attributes are complex, dealing with both the dark and light side of human experience, but let’s say just that many of them reflect the ongoing process of moving into and consolidating a patriarchal mindset. I ‘read’ the image for how I see her today, to empower my understanding of woman carrying the values of universal continuity for the human species, as bearer of life, as nurturer and sustainer. 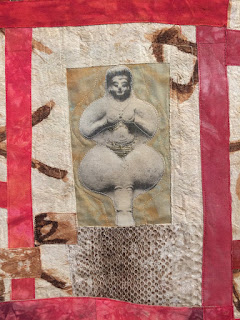 Through the annual sloughing of their skin, snakes have always been associated with renewal and rebirth, and therefore with the fecundity of woman; as well as being the guardian and protector of sacred precincts, including the household. Their natural movements and instincts also represent a connection between the underworld and the earth. All of the shrines in the quilt have a section of the skin found by my neighbour incorporated into them. The significance seems to adapt to that of the Goddess in each. For example, for Kali Ma it is the end of the creative cycle, as in her compassion she destroys to create at the season of Autumn in the annual cycle. In my interpretation of the Goddess correspondences for the Wheel of the Year, it is her role to sort and separate as she ‘composts what remains from the harvest and returns it to the dark in preparation for continuity into the next creative round.’[2] 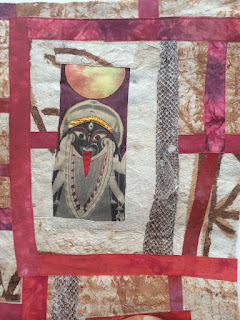